The Fellowship of Isis London Gathering 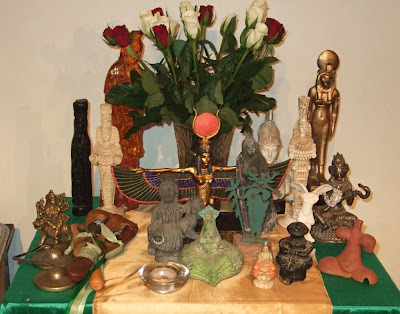 Last Sunday I took part in a Fellowship of Isis gathering in London. It was a rare chance to meet and work with Olivia Robertson, co-founder of the Fellowship of Isis and a truly amazing woman. Olivia is 94 years old, but has a huge amount of energy and is one of the most powerful priestesses around as well as being a fascinating character and a delightful person.

I signed up for the gathering as soon as it was announced. I'm glad I got in quickly because the event sold out in hours. I didn't list it on my blog's events page, because by the time I'd done so there would have been no tickets left.

The FoI gathering was organised by priestess Caroline Wise and the guest speakers were Wiccan author and teacher Vivianne Crowley and art expert Fleur Shearman as well as VIP Olivia. It took place in the basement meeting room at Treadwells.

Before the event, the organisers conducted a short ritual to invite Isis, Goddess of The Thames, to bless the meeting space. I think it worked.

As we all took our seats, water began to flood up through the floor - from no apparent source and for no apparent physical reason. There was a little panic - everyone rushed upstairs, and mops and buckets were found to bail out as much of the water as possible. After a while the inundation subsided and we all returned to our slightly wet seats and the gathering began.

The first talk was by Fleur Shearman, an expert on the Goddess in art, on the subject of Minerva and the Muses.

Fleur's talk showed the Muses and Minerva as they have been depicted in art throughout history and the influence they have had on important cultural figures over the ages.

Vivianne Crowley gave a talk on the Black Madonna. Statues of the Black Madonna appear all over Europe band other parts of the world. They often have huge local popularity, appealing to people of all classes and ethnic origins as well as people of different faiths, but their origins are a little mysterious. Many of the statues are very old or are modern replacements for old statues that have been damaged or lost.

Some were brought back by Crusaders in the Middle Ages and may have come from Coptic churches in North Africa. This was not necessarily done for the sake of looting - the Christian soldiers may have been trying to save these works of sacred art from destruction.

Some of the Black Madonna statues may have originally been images of the Goddess Isis with the child Horus, and were renamed as the Virgin Mary with the baby Jesus when the pagans who venerated them were Christianised.

These were fascinating talks, but the highlight of the day was a pathworking by Olivia. She said she was inspired for the pathworking by travels abroad when she felt she was visited by three goddesses, Yemaja, African mother Goddess of the Oceans, Pele, Hawaiian Goddess of fire and volcanoes, and a celestial Goddess of the stars.

The pathworking took us to meet these three goddesses on a journey through the dark underworld womb of the mother Goddess, through rebirth into the light and then up into the heavens to the realm of the gods, goddesses and ancestors.

It was a powerful pathworking - at first painful as we had to face our inner fears, but eventually uplifting and reassuring as we learnt that nothing is truly lost and everything is reborn, recycled or renewed.

During the pathworking, something rather amazing happened to me on a personal level. I met the spirit of my grandmother in the realm of the ancestors. She had been an astrologer and a member of the Astrological Lodge, in London, when she was young. Recently, while clearing out the attic and some old cupboards in my family home, I came across my grandmother's letters, notes, photos and paperwork relating to the Astrological Lodge and its founder Alan Leo, dating back to the early part of the 20th Century.

I had emailed the lodge some time ago asking if anyone there would like to look at this paperwork, but had had no reply.

In the pathworking, I felt that my grandmother approved of my actions - she approved of me being at the FoI gathering and contacting the lodge. The very next day I got two emails from members of the lodge - one offering to help store the documents and another from a historian studying the history of the lodge who was interested in seeing them.

Whatever goddesses were listening on Sunday - and my grandma, and Olivia - thank you!

If you are disappointed at missing the FoI London gathering, you will have another chance next year. Hopefully it will be at a bigger venue so more people will be able to attend.

The Fellowship of Isis is dedicated to honouring the Goddess in her many forms. It was founded at Clonegal Castle, Ireland, in 1976 by Olivia Robertson with the late Lawrence and Pamela Durdin-Robertson. Membership is free and you can find out how to join on the FoI website.

The photo shows the Goddess altar at the FoI gathering in London.

This lovely comment was sent to me by Olivia Robertson:

"Thank you for your discerning. I was so happy that you received the presence of your mother during my path working because my sole aim was to show that the gods and goddesses are real, not invented by magicians, and that we have souls and life before and after this earthly existence. May you now having met your grandmother, meet a goddess, they exist too. The spirit world are determined to come through."

Oops - that should have said "discerning writing".

Caroline Wise sent me a message to say:
"I thought our shrine looked beautiful, it was put up in about 3 mins, the goddesses decided where they wanted to go, and kind of took its own shape, there was no time for thinking about which statue should go where. I always enjoy your blog. There were some stresses and distresses of the day for me, the paddling beneath the water stuff that is always going on when organising events (sorry, water analogy is maybe tempting fate, LOL), so it is nice to see that those who have attended enjoyed it. I agree with you we were blessed with immaculate presentations. With blessings of Isis."

sounds like a very interesting gathering--how strange[or maybe not!] about the water appearing
om shanti xx