A winning day at the PF 40th Anniversary 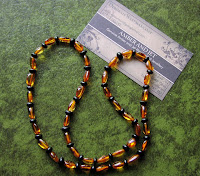 I must say I have been astoundingly lucky at winning raffles at pagan conferences - I've won things at Witchfest South and the Gaia-Sol Convention over the past few years.

The beautiful amber and jet necklace in the photo, made by Deborah Westmancoat, was in my opinion the best prize in the raffle at the Pagan Federations 40th Anniversary Event last weekend - and I was lucky enough to win it with the first raffle ticket to be picked out of the box!

The PF 40th Anniversary celebrations ran over two days, with a pagan conference on Saturday 8 October, a masked ball in the evening and a family day on the Sunday.

I was only there for the conference - my own family needed me for the rest of the weekend - but I had a fantastic time even before I won the raffle.

As well as going to some wonderful talks and workshops by luminaries such as Professor Ronald Hutton, Rufus Harrington who runs Temple of the Phoenix, and Mogg Morgan author of The Wheel of the Year in Ancient Egypt,

it was great to meet up with so many friends and familiar faces.

There is so much more I could write about that happened during the day - and I will, over the next few weeks. In particular, I am going to be doing more research into the magical significance of amber and jet jewellery, which is traditionally worn by high priestesses because it symbolises the powers of the light and the dark and the balance between them.

Deborah Westmancoat makes genuine amber and jet handcrafted jewellery which she mainly sells at stalls at pagan events. You can contact her via email at yarrow.taunton@googlemail.com or call 07974649794.

http://www.badwitch.co.uk/2009/06/lucky-times-for-bad-witch.html
The Wheel of the Year in Ancient Egypt: Calendars and Moon Magick

Gorgeous necklace ! Did you see Ronald Hutton in the flesh? What's he like? I've been fascinated by him since reading The Triunph of the Moon!

Yes, it is a lovely necklace. Ronald is a very good speaker - he often gives talks at large pagan conferences in the London area and in other parts of England.