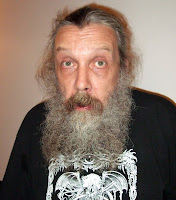 Alan Moore is best known as a comic-writing genius, the author of such classics as Watchmen,

and V for Vendetta.

He is also a magician – and that was what he was talking about at pagan pub meet The Moot with No Name last week.
The weekly event which has lectures on occult subjects is very highly regarded and attracts some of the UK’s most experienced magicians - and the venue was packed to hear Alan Moore.

Alan turned up with a bad cold. He admitted he had felt too grotty to prepare his talk and had been going to wing it, but added: “You people know about magic, you won’t accept rubbish. This is about my magic, from my perspective.”
He said: “When I was a child, I knew what magic was – witches, wizards and spells – but when I got a bit older I realised that wasn’t in abundance. By school age, I thought that magic existed in a made-up way; no more real than Father Christmas. I still have doubts.”

“In my teenage years I thought magic was a palliative thing that cheered us up in a bleak world. No matter how many times you do incantations over a broom, it won’t multiply and clear up the rubbish. But, in the 1960s people were dabbling in magic. There’s an excellent although depressing book by Gary Lachman on the darker side of the occult in the 1960s [The Dedalus Book of the 1960s: Turn Off Your Mind.

“When I was much older I started to visit occult shops, but I felt that only I was rational. I felt other customers' needs were emotional rather than intellectual; the need to have secret knowledge to liven up a dull personality.”

“When I was in my late 30s, I read about John Dee. He certainly was not an idiot. He sounded like a genius, a mathematician and the man who invented the concept of the British Empire in the reign of Elizabeth I after studying mythology. But he spent a lot of his time talking to beings he called ‘angels’. John Dee probably had to call them angels; people were always wanting to prove occultists were flammable.”

It was after reading about John Dee that Alan Moore decided to take magic seriously, but his declaration that he was a magician – on his 40th birthday after a bit too much to drink – didn’t seem to surprise any of his friends. “Most people didn’t bat an eyelid,” he said.

Deciding to follow through on his drunken announcement, Alan talked to his friend Steve Moore (no relation, despite the surname, but a fellow comic-writer and an occultist).

Alan said that Steve, who honoured the moon goddess Selene, recommended choosing a god or goddess “because magic is an imaginary territory, so you need an imaginary friend”.

Steve told Alan: “Either choose a god, or let one choose you.”

In January 1994, at Steve’s house, Steve asked him if he had seen the Greek snake god Glykon and showed him a picture of a statue that had been discovered in the ruins of the ancient Greek city of Tomis, in Constanta, Romania.

He said: “It was a beautiful snake with a humanoid head and a face a bit like Paris Hilton. It was comical, beautiful, awesome – and smug. I thought I could relate to that god.”

Alan then asked Steve how exactly one should go about worshipping a god. They took some magic mushrooms – legal back in 1994, but now an illegal Class A drug. While waiting for the psychedelic substance to start working, they chatted about what form a magical ritual involving Glykon could take. They started to formulate a ritual using cut-up techniques to combine two sets of writing; one an evocation of the God and the second a piece of purposive magic.

Things started to get a bit weird. A conversation in which Alan translated “piece of purposive magic” as “evocation of the goddess” and Steve corrected him turned into a kind of Groundhog Day time-loop while the ceiling seemed to disappear and they felt the presence of entities watching from above. Alan said “it felt as though this was the body of Glykon, curving back on itself”.

Certainly it could have been the mushrooms, but Alan said: “If it was an hallucination, it was different from any I had had before – and it was a shared experience.”

He said: “I was in a peculiar state for several months, because I knew magic was real in a certain sense. I am a rational person and I like to think things through. There is no proof that magic affects physical reality, but it does affect immaterial reality.

“If something is happening in someone’s mind, we think it is not real. But are thoughts real? Wittgenstein said a thought is a real event in space and time.”

Alan expressed the opinion that science cannot really explain the human mind and that “psychiatry is occultism in a lab coat”. He pointed out that psychiatrist Carl Jung was accused of occultism, while physician and occultist Paracelsus came up with the idea of the unconscious mind even before Freud and Jung wrote about it.

Alan said: “We do not experience reality directly – our sensory organs send messages to our brain, which interprets them. Some scientists, such as behaviourist BF Skinner, say that there is no such thing as consciousness; it is all conditioned response. Scientists would like to be able to explain everything as biology, chemistry or physics. Thought messes up the rational universe.

“But what if there are two different sorts of reality; physical existence and the idea of things?

“The idea of a chair is more important than the physical existence of a chair because, if there aren’t any physical chairs we can always make some new ones so long as we have the idea of a chair.” Perhaps Alan was inspired in that idea by the immediate reality that he was giving his talk in a crowded pub room with a real shortage of chairs...

He went on: “Physical reality and immaterial reality are both real, but in a different way. We all have our own identity and our own mind space. The geography of the physical world is based on distance, but the geography of mind space is based on association. For example, Land’s End and John O’Groats might be many miles apart, but they are always close together in association.

“Time is also different in mind space and imaginary creatures can live there. Gods, monsters and aliens can all be inhabitants of mental space.”

Describing magical experiments he had taken part in to share and transmit images from one person to another in mind space, Alan concluded that magic was real.

“Magic has become an important part of my life,” he said. “Most of the stuff I have got out of magic has been a help to my work and well being.”

Pagan forum The Moot with No Name meets at the Devereux public house, 20 Devereux Court, off Essex Street, London WC2R 3JJ on Wednesdays from 7.30pm (although the meetings on 7 December and 14 December will be at The Cartoonist in Shoe Lane in London).
For further information about events run by Atlantis Bookshop visit http://www.theatlantisbookshopevents.com/
The picture top right is of Alan Moore. The picture bottom right is the cover of his graphic novel Promethea.

Note: The Bad Witch does not recommend drug taking. Magic mushrooms are illegal in the UK.

Links and previous related posts:
The Dedalus Book of the 1960s: Turn Off Your Mind (Dedalus Concept Books)