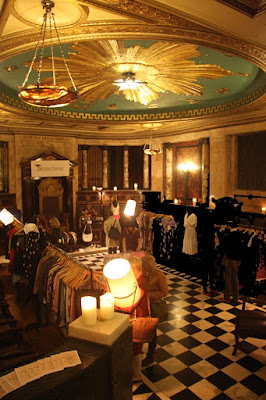 The picture above shows the Temple of Treasures - a vintage fashion pop up market that is taking place this weekend in a wonderful Masonic Temple in the City of London. It sounded so wonderfully bizarre that I decided I had to go along this afternoon.

To be honest, I partly went because I was rather interested in having a look at the venue - the Masonic Temple underneath the Andaz Hotel, in Liverpool Street. The Andaz was originally the Great Eastern. Built in 1884, it was one of London's original railway hotels and the fabulous Masonic Temple was there from the beginning. The temple isn't normally open to the public although you can hire it for special events.

I have to say, it is pretty impressive. It also makes a marvellous setting for the vintage fashion event, which is being run by Lereese Atkinson who writes a blog called The Girl Who Stole Vintage. I ended up buying two pretty cotton frocks full of the charm of  bygone summer days. Nostalgia is in, they say.

The Temple of Treasures vintage fashion pop up market is also on tomorrow, Sunday 1 April, from 10am to 4pm. If you happen to be near The City of London, do go and have a look around.

The event is at the Andaz, 40 Liverpool Street, London EC2M 7 QN. For more details, visit the Andaz website or The Girl Who Stole Vintage website.