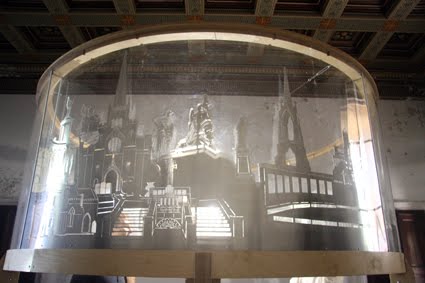 A necropolis is a city of the dead and Samhain, or Halloween, is a time when pagans remember those who have died. So, I thought that I'd post some photos I've taken of London burial grounds, continuing the series I began last year called London Necropolis.

To start with, here is a picture of the Streetscape Carousel that was created as an art display for West Norwood Cemetery, in South London, which is the world's first Gothic cemetery. The carousel shows scenes from the so-called 'Magnificent Seven' Victorian cemeteries that encircle London, including West Norwood.

The Magnificent Seven cemeteries were built during the 19th century, when London's churchyards and older burial grounds were full to bursting. They were new private cemeteries built around the edges of London at Highgate, Kensal Green, West Norwood, Abney Park, Brompton, Nunhead and Tower Hamlets.

The Streetscape Carousel was lit up inside and, as it revolved, cast silhouettes onto the surrounding walls showing the skylines of the seven famous cemeteries. It was set up inside the Greek chapel, inspired by the Parthenon on Mount Olympus and which is rarely open to the public. Members of the Friends of West Norwood Cemetery were on hand to show people how it worked.

I visited the art installation on the last day the carousel was on show, back in September, but saved the photos I took until closer to Halloween - a more appropriate time for all things Gothic.

I'll be posting more of my photos from West Norwood Cemetery soon. 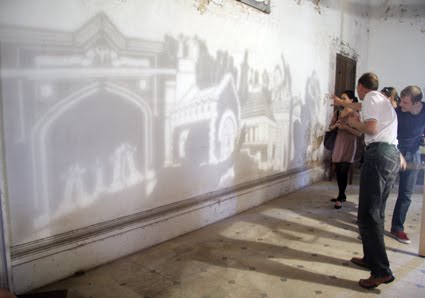