Glastonbury Tor - Entrance To The Land Of The Fairies 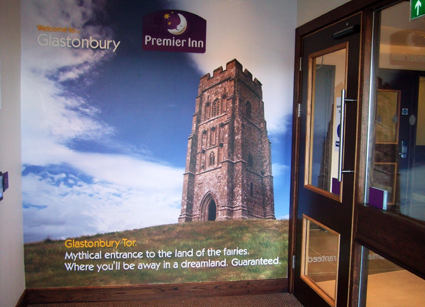 "Glastonbury Tor. Mythical entrance to the land of the fairies." So reads the legend that greets you at Premier Inn, Glastonbury, where I was staying last weekend. 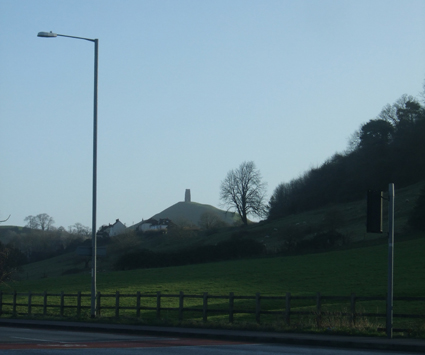 The hotel chain renowned for affordable rooms is embracing the New Age and has just opened at a location in the Somerset town famous for its associations with all things mystical and spiritual. A nice person from Premier Inn's PR team asked me if I wouldn't mind writing about it.

"Delighted to," I replied. I love Glastonbury and was very happy to spend a weekend there in early spring and blog about it.

The landmark you first see as as you approach Glastonbury is the Tor. You can also glimpse the Tor from the windows of the bedrooms at the front of the Premier Inn, and from the road outside. I photographed the view, which you can see in the picture to the right.

According to folk tales, the Tor is indeed the entrance to fairyland. Specifically, it is the resting place of Gwyn ap Nudd, King of the Fairies in old Welsh tales. He is said to rule the fairy kingdoms during the winter months. At Samhain (Hallowe'en), when the veil between the worlds is thin, he emerges from the Tor to take his throne as Winter King to reign until Beltane, (May Day).

The Tor is also associated with Avalon, King Arthur and the Holy Grail. There is evidence that the ancient Britons called the Tor Ynys yr Afalon, which means "Isle of Avalon". In Iron Age times, the Tor would have, indeed, been an island surrounded by a lakes and fens that were later drained to become rich farmland.

In the middle ages, the monks at Glastonbury Abbey claimed to have found the graves of King Arthur and Guinevere in the abbey grounds, in the shadow of the Tor. You can see the view today in the photo to the left. Some say that Avalon itself lies in fairyland, and that was where King Arthur's body was taken after he was mortally wounded in battle, and from where he will one day return as The Once and Future King.

The link with Avalon is alluded to in the BBC TV series Merlin, where the hill is visible in the end scene.

Legends place Glastonbury Tor as one of the possible locations of the Holy Grail, So too are Glastonbury Abbey and Chalice Well, which is at the foot of the Tor in beautiful gardens that are open to visitors each day. It is said that Joseph of Arimathea brought the chalice that caught Christ's blood at the Crucifixion to Glastonbury for safekeeping.

On the top of the Tor is St Michael's Tower, all that is left of St Michael's Church, which had a turbulent history. A medieval church on the site was destroyed by an earthquake on 11 September 1275. A second church was built there but, during the Dissolution of the Monasteries in 1539, was the place of execution of Richard Whiting, the last Abbot of Glastonbury Abbey. He was hanged, drawn and quartered along with two of his monks. The tower is now a grade I listed building and is managed by the National Trust.

Walks to the summit of Glastonbury Tor are very popular with hikers as well as grail questers. Although it is a steep climb, the wonderful views from the top - as well as the chance to explore the tower - make it well worth it. If you prefer more leisurely sightseeing by car, bike or on foot, a road runs all around the bottom of the hill with great photo opportunities, including the place where I took the picture you can see below.

The meadows at the foot of the Tor can be a bit muddy during the winter but are ideal for picnics when the weather gets warmer. Don't fall asleep there though, especially on eve of May Day or Midsummer, for they say that at those times the gates to fairyland open up and you could be whisked away to the halls of Gwyn ap Nudd, never to be seen again. 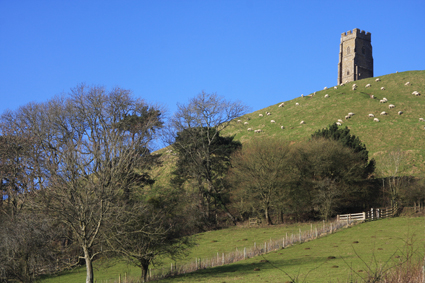