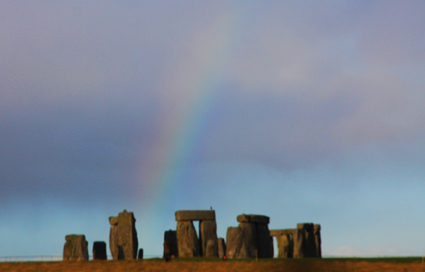 I saw this rainbow over Stonehenge yesterday late afternoon as I was travelling home to London from a weekend in Glastonbury.

The photo is a little blurry, which isn't that surprising as I took it from the window of a car that was doing 60mph on the A303 over Salisbury Plain. Don't worry, my husband was driving, I wasn't risking an accident!

I saw the rainbow form in the sky as we approached the ancient stone circle and very quickly grabbed my camera, wound down the car window and took this shot as we zoomed past. A few moments later, the rainbow was gone.

It might not be a perfect photo, but the sight of a rainbow in the sky over Stonehenge was the perfect end to a wonderful weekend away.

As I mentioned on my blog yesterday, I was staying in Glastonbury because I had been asked to write about New Age Glastonbury and a Premier Inn hotel that’s just opened in the town. I will be doing a full write up about those things this week.