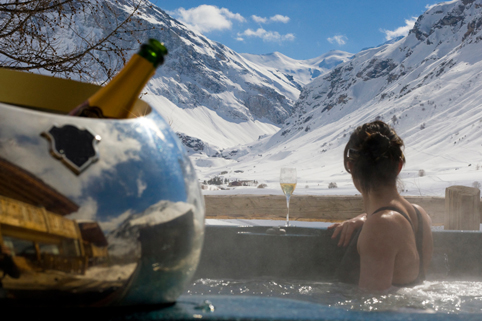 Who wouldn’t want to share a hot tub with a bunch of naked witches?

That, at least, was what my husband said when I told him I was thinking of writing about hot tubs on my blog.

A hot tub is something I admit I have always wanted to own. I’ve enjoyed soaking in hot tubs while on holidays – most memorably on the deck of a ship in the Arctic Circle while I was in Norway last year, in search of the Northern Lights. Mind you, I was the only witch present on that occasion, and I was sharing the tub with three buff Norwegians who wouldn't have looked out of place on a Viking longboat.

Exciting company or not, there is something truly magical about relaxing in a pool of steaming, bubbling water while all around are snow-capped mountains and the temperature outside the pool is below zero. And with snow still falling in the UK at the moment, the idea of soaking away the winter-weather blues in a hot tub on the patio had enough appeal to send me browsing the Arctic Spas website and dreaming.

But if you are wondering why I am blogging about hot tubs, well, they do actually have a history that dates back to pagan times. The Ancient Romans loved all sorts of baths, including ones that were very much like hot tubs. Rich Romans would have had them in their villas, but there were also public facilities that were a place to socialise as well as to get clean. However, hot tubs - and warm baths generally - fell into disuse in Christian times because "the Church considered ... the practice of bathing a prelude to forbidden behaviour."

Instead, the early Christian Church felt it was better for the soul to take bracing dips in the icy cold waters of a holy well, as was explained and demonstrated in last week’s BBC documentary Pagans and Pilgrims, which looked at sacred springs. If you missed that, programmes on BBC TV Channels are usually available to watch on iPlayer for at least a week after they are shown: http://www.bbc.co.uk/iplayer/

For pagans today, ritual bathing is an important part of preparing before a magical ritual. Although you can just have a quick shower, I think a hot tub would be a much nicer way of not only cleaning your body, but also helping clear your mind of all the stresses and worries of daily life. And that reminds me of a joke someone sent me:

Of course, there are two big considerations when buying a hot tub – whether you have the space for one, and how much they cost.

If you have a garden or a patio, that’s ideal as many hot tubs are designed for outdoor use. You can get covers to put over them to stop leaves falling in – also ensuring you aren’t sharing your tub with the local urban fox population.

When it comes to price, there certainly are top-of-the-range hot tubs aimed at those on movie-star incomes, but there are also plenty of cheaper options, I discovered. The Arctic Spas website even has a section for second hand hot tubs, which are much more affordable.

And, as I explained to my husband when I was trying to convince him to buy me a hot tub, I’m sure all my witchy friends would want to come round and enjoy it. Then he could really be that lucky man who could say he had shared a tub with a bunch of hot, naked witches!

The photo at the top is from the Arctic Spas website and is used with permission.

The early Irish Christians encouraged regular hot baths; a survival from the old celtic culture. When the Council of Whitby chose the Roman church over the Irish as the influence on the anglo-saxon lands, the more harsh Roman church made bathing the least of the losses.

Alan, that makes a lot of sense. Early Irish Christianity had a lot going for it. It was akin to nature spirituality and was very compatible with paganism in many ways. It is such a shame that it was taken over by more extreme versions of Christianity.

"three buff Norwegians who wouldn't have looked out of place on a Viking longboat" *sigh*
And there's my Happy Thought for the day. There's just something about hot water swirling around one's body that leads to spiritual experiences...I'd imagine doubly so in chilly climes.