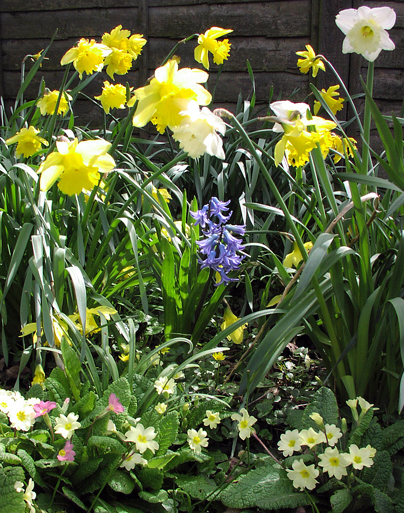 It has certainly been an a good year for daffodils. These beautiful messengers of spring are usually only out in my garden for a few weeks from late February to mid March, but the unusually cold weather over that time made the season seem to stand still.

Whereas I spent most of March and early April huddled indoors away from the late snow and icy winds, the daffodils have thrived. It seems they have been flowering for months. I don't think I have ever had such a great display of daffodils in my garden.

Now the sun is out and the late spring flowers are rushing to catch up! The bluebells are at last starting to come out too - although later than usual. I can't remember ever before seeing bluebells and daffodils together in mid April!

The message that I'm taking from this is that things don't always go to plan but, rather getting upset about it, it is better to look for the hidden benefits a strange turn of events can bring. Let's hope the warmer weather is here to stay now.