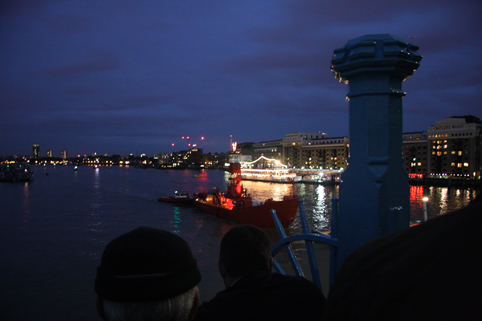 This post should probably be called Pagan Ear rather than Pagan Eye. On Saturday, while I was taking part in a wonderful psychogeography-inspired walk and pub crawl along the Thames - which I'll probably be writing more about later - I found myself at Tower Bridge just as it was about to open to let in a flotilla of various historic vessels and ships. They then began to play opera using their bells, horns, whistles and hooters. It was quite remarkable.

A huge crowd was gathering to listen and watch the spectacle, and someone told me that this performance was called 1513: A Ships’ Opera, by Richard Wilson and Zatorski and Zatorski, and was part of the Thames Festival.

You can find out more about it and hear the opera on the Thames Festival website - although the online version is considerably more melodic and less surreal than it sounded to my ears at the time.