Days Out: The Pitt-Rivers Museum, Oxford 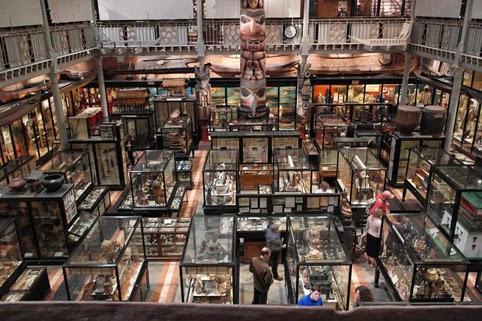 This feature on one of the most fascinating museums outside London was written by folklorist and occult tour guide Paula Dempsey:

Less a museum, more a warehouse of the bizarre. The first thing that hits you when you walk into the Pitt Rivers Museum of anthropology and archaeology is how cluttered it is. Glass cases crammed full of stuff and squashed so close together offer a tantalising invitation to explore.

The ground floor is the most exciting. There's a collection of religious artefacts including a beautiful model Buddhist temple with a surprise inside, shrunken heads from mysterious civilisations and my favourite Hindu god, Hanuman, seemingly dancing to the beat of his own groovy drum. Plus lots of Egyptian stuff including mummies and mummy cases.

Tucked behind the temple was a small glass case sitting on the floor. It would have been easy to have missed it completely if I hadn't seen something like it many years before. Back in the 1970s at Brownies a woman showed us how to make corn dollies in a traditional spiral pattern. The thing in the case was just that, although a lot larger than the ones we made that night. In parts of England the corn dolly was made with the last sheaf of corn and hung in the farmhouse for luck until the next harvest when it was ploughed back into the land to bring fertility to the soil and replaced with a new one.

The corn dolly case pointed the way to the Pitt Rivers' folklore collection – charms and amulets a-go-go and from all over the world. We particularly liked the terracotta body parts made in thanks to the saints for healing, although the pottery willies were a bit of a shock! If the glass cases weren't enough, each one had drawers underneath full of even more wonderful stuff. One of the curators showed up as we were exploring and showed us a glass rolling-pin containing a caul, which came from Sunderland and would grant the owner immunity from drowning. There was also a bit of desiccated hot cross bun which the curator believed was a cure for colds. I thought it was for toothache, but a bit of research when I got home showed that dried hot cross buns were regarded as a cure for lots of different maladies, so I guess we were both right.

Other highlights included the 100 year old cheese and, up in the galleries, some very early tarot cards in the style of the 1JJ Swiss deck. There are also two excellent totem poles with frogs, eagles and possibly even a raccoon. The shamans amongst you will enjoy the wide range of masks too.

The photo at the top was taken by Steve Dempsey.