Doctor Who: Vision of a Weeping Angel? 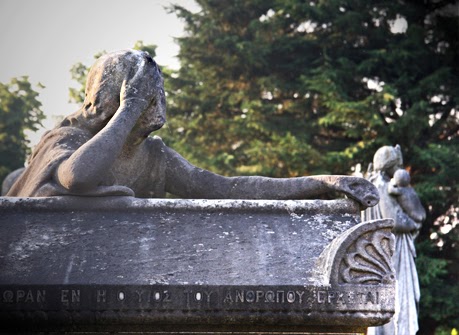 Looking forward to the Doctor Who 50th anniversary special and at the same time stepping back in time to early summer (in my mind, I mean, seeing as I am not capable of real time travel), here is a photo of something that I thought looked a bit like one of the Doctor's scariest enemies - a Weeping Angel.

Although I've watched Doctor Who since the first episode, I think the Weeping Angels are far more scary than the Daleks, Cybermen or anything that got me hiding behind the sofa when I was young.

I saw the statue in West Norwood Cemetery - I imagine it is still there, or at least I hope it hasn't moved since I saw it last. I very much hope so...