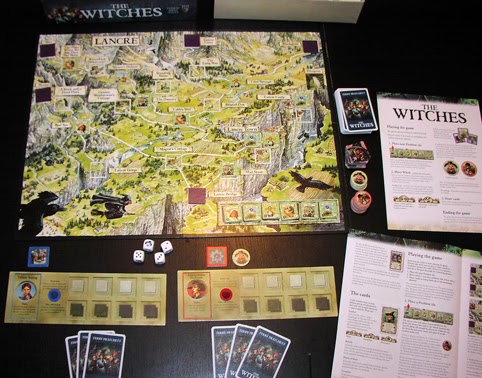 and I love playing games, so I was delighted to get given a copy of Terry Pratchett The Witches Board Game

for Yule. It got played several times over the winter holiday, so I thought I'd write a review of it for my blog.

The idea behind the game is that each player takes on the role of a trainee witch in the land of Lancre under the watchful eye of Granny Weatherwax. You travel around the valley curing sick people and farm animals, helping deliver babies, consoling grieving relatives in cases of death and generally doing the work of a local witch. From time to time you might also have to deal with more difficult problems such as invasions of elves or supernatural threats. Players compete to be the best witch in the valley through scoring points.

The game mechanics might seem a little daunting at first if you are not someone who often plays strategic boardgames, but actually isn't that complicated. There is a 12-page rulebook, for example, but it has lots of pictures and examples and very clear instructions to set the game up and start playing.

It is played with the use of cards and dice. The dice are rolled to try to beat the target number of each problem. The cards help with this and also do other things. Players have a hand of cards and refresh them at the end of their turn. However, the cards can be used in several ways. Many have a symbol for headology or magic, which represents a number you can add to a dice roll. Each card also has some sort of special use, such as being able to instantly cure a sick sheep or allow a re-roll of the dice.

What I really like about this game, however, is that it seems to me to be exactly what the life of a witch should be like in an ideal world - having a cottage in an idyllic valley, flying about on a broomstick, solving people's problems and sometimes meeting up with your friends for tea and a good cackle.

Although The Witches Board Game

is aimed at Pratchett fans, I really think that any witch would love this. It is suitable for up to four players - but if you happen to be a solitary witch there are rules that even let you play the game on your own.

I was SO excited to get this. I invited three people over after last Christmas to learn to play it with me. It was a complete let down and a horror. We could barely get past page 4 in the instructions. After you have picked a character, taken all the cards apart, figured out what to do with your tokens, then you have to stand on one foot with your tongue in the right side of your mouth (just made that part up) before you can even roll the dice. Incredibly complex and not in the least intuitive.

Very disappointed. It is gathering dust on the shelf right now.

Next time I have three days to spare, maybe I will open the box again. I had huge expectation and was thrilled, only to be very disappointed :( I am glad that you liked it.

Oh well, we all got to drink the wine after, so it was not a complete write off of an evening.

Sorry you didn't like it. I am a keen hobby boardgame player so am used to moderately complex rules - I do agree it is much more complex than, say, Cluedo or Trivial Pursuit. The game is now quite rare and fetches a high price on eBay. You would make a profit if you sold it, which is what I would recommend if it isn't your taste.

No, I don't mean to be snippy and nasty. I will truly try again.I am not like you, I think "Go Fish" is extreme sports. So I will sit down quietly again and try it. If it does not work for me, I will bequeath it to my daughter, who will make 3 trillion bazillion dollars off it in 2050. :D

There's no reason why two people have to like the same game. If it isn't your thing and you don't want to sell it, then giving it to your daughter sounds like a fine plan.