On Friday evening I went to a brilliant talk at the British Museum called Evil Hags and Mothers: Women and Witchcraft in Germany. I know I was quite lucky to get tickets as they sold out fast.

The speaker was Professor Lyndal Roper of Oxford University, the author of Witch Craze

and The Witch in the Western Imagination.

Her talk was introduced by Deanna Petherbridge who curated the exhibition Witches and Wicked Bodies, which is currently on at the British Museum and which Evil Hags and Mothers was about.

Professor Lyndal started by saying that when the exhibition was previously on, in Edinburgh, there was a visitors' book people could comment in. Many wrote that they found the images shocking, particularly because they were so misogynistic. The images date from before, during and after the witch craze of the 16th and 17th centuries, which was most rife in Germany.

Many of the women tried for witchcraft confessed to having sex with the Devil and flying to Sabbaths, then digging up the corpses of babies to make an ointment to harm children, crops and animals. The women persecuted were not outsiders - they were usually members of the community who knew their accusers and the people and animals they were supposed to have harmed by magic.

The question Professor Lyndal posed was, how could this have happened? How could people accuse their neighbours knowing it could be lethal? 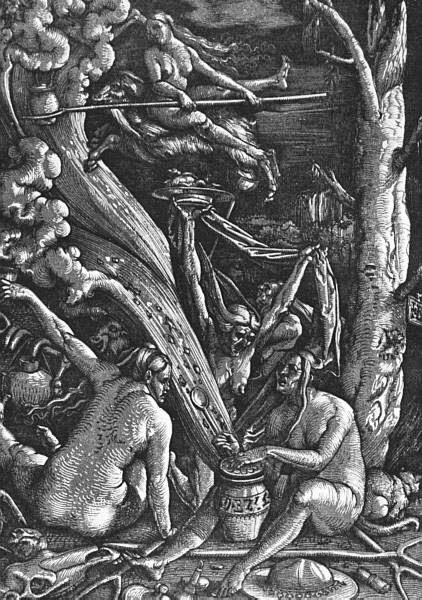 She pointed out that the popular image of witchcraft in art had its origins at least 70 years before the height of witch trials, which was from 1580-1640. She used as an example the picture of a witches' Sabbath by Hans Baldung Grien from 1510 (left).

It is currently estimated that between 40,000 to 50,000 people were executed for witchcraft during the witch craze, mainly in Germany and parts of France and Switzerland that were German-speaking. Around 80% of those accused were women, and around 75% of them were aged over 40. In contrast, men committed nearly all of the other types of crime in the early modern era.

Like the Hans Baldung Grien picture, most of the images in the Witches and Wicked Bodies exhibition show older, post-menopausal women with saggy breasts. However, they are not portrayed as frail - in fact they are generally shown to be powerful.

Looking at artistic representations of the era, there are three kinds of women: unmarried women, fertile women and post-menopausal women. Artists of the 16th century in Germany for the first time had an interest in painting nudes. It was novel and something they liked to experiment with by showing women from different angles.

Apart from pictures of witches, another popular genre was the women's bath scene. These also showed different ages of women with bodies viewed from different angles. Triads of young, married and old women were the female version of pictures of the ages of man.

Professor Lyndal said it was important to consider who the witch is. She is powerful, visually central in the pictures or in such a position that eyes are drawn to her. The subject of women in league together suggests that the older woman has status and is a key figure. The underlying suggestion is that any old woman could be a witch. An important factor in this is fertility. The witch causes bad weather and crops to fail; she makes men impotent.

Another genre of art from the era shows the lying-in room - the bedroom of a woman who has just given birth surrounded by women caring for her and female visitors. This was a time of festivities that lasted for weeks. It was a private room mostly filled with women who helped the new mum, partly by bringing gifts of food and drink at a time when she could not get up and about.

The lying-in time, from birth to six weeks later, was also when women were believed to be particularly susceptible to the temptations of the Devil. After six weeks the mother went to church to be purified in a special ceremony. The lying-in period is frequently cited in witch trials as when something went wrong. Fifty percent of babies died back then and older women present were often accused of having caused it.

From the 1580s to 1640s there was an economic downturn in Germany. A mini ice age caused bad winters and wet summers. In many towns legislation was brought in to raise the age of marriage and to prevent poor people and outsiders from marrying. This was to prevent children being born who might need charity under poor laws. It was also an era when fertility levels were low - many noble houses died out because they had no heir.

In this society, marriage and fertility were seen as a huge privilege. Pregnant women and new mums expected to be envied - especially by old women. This ties in with the view of witchcraft being an attack on fertility. An old woman might be accused of harming a child through envy even if she spoke words of admiration or brought a gift. Envy was seen as being deadly.

Even though pictures of witchcraft such as the one above might be have been old at that time of the witch craze, they were still popular and many were reproduced using cheap woodcut prints on decorative items for modest homes. Of course much of the imagery is fantasy - but there is a relationship between fantasy and what is seen to be reality.

You can find out more about about the exhibition Witches and Wicked Bodies here: http://www.britishmuseum.org/whats_on/exhibitions/witches_and_wicked_bodies.aspx

The Witch in the Western Imagination.