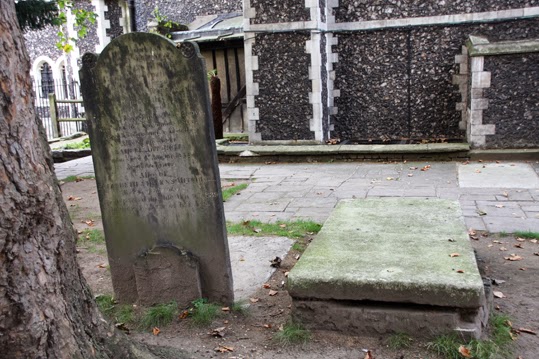 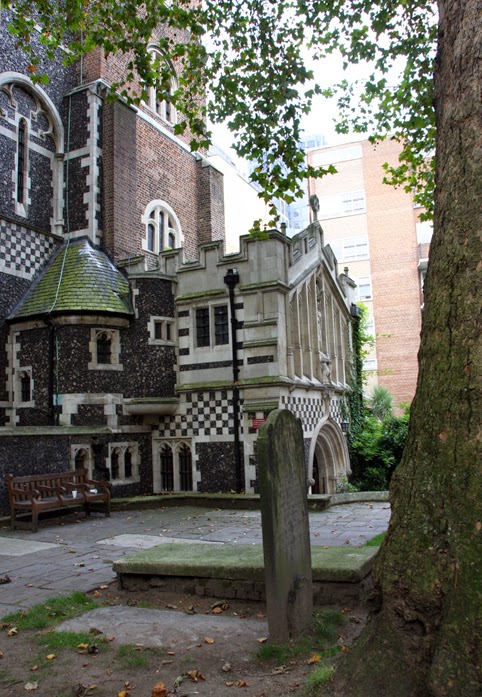 Continuing my month of celebrating death on A Bad Witch's Blog in the weeks around Halloween, here is a grave that Hugh Grant posed on in the movie Four Weddings and a Funeral. It is in the churchyard of St Bartholomew-the-Great, in London, and the church was also the scene of the fourth wedding in the film.

The grave in the photo above is also where an odd tradition takes place each Good Friday. In 1887 Joshua Butterworth set up a trust to distribute alms to poor widows. The trust's stated aims are: “On Good Friday in each year to distribute in the churchyard of St. Bartholomew the Great the sum of 6d. to twenty-one poor widows, and to expend the remainder of such dividends in buns to be given to children attending such distribution, and he desired that the Charity intended to be thereby created should be called ‘the Butterworth Charity.’”

This custom was called the “Widow’s Sixpence”. Apparently hot cross buns are still given out to choirboys on Good Fridays, but not sixpences.

The churchyard was one of the sites I visited recently when I went on a Secret London walk and I am indebted to tour guide Richard Jones for telling me about the grave's famous history.

St Bartholomew-the-Great is one of London's oldest churches. It was founded in 1123 as an Augustinian Priory and has been in continuous use since 1143, escaping destruction in the Great Fire of London in 1666. These days, if you want to go inside and have a look then you have to pay an entry fee to go towards the upkeep of the the church, although you don't have to pay if you are just going to pray there or attend a service.

If you are ghost spotting at the church, it is said to be haunted by a monk who is looking for a stolen sandal. Some people have also smelled a strong scent of burning late at night, which is said to be a spectral reminder that heretics were burnt to death in the area around the church during the reign of Mary Tudor.

In the run-up to previous Halloweens - or Samhains - I've blogged about other burial sites under the title London Necropolis. Here are links to a few of them: 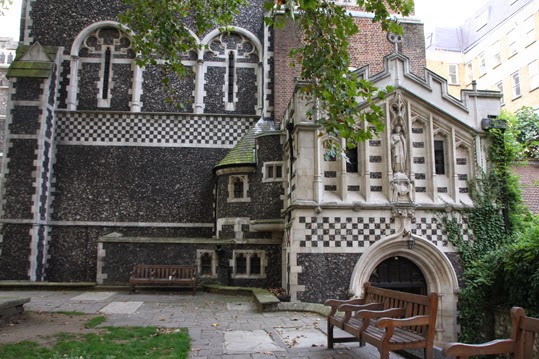