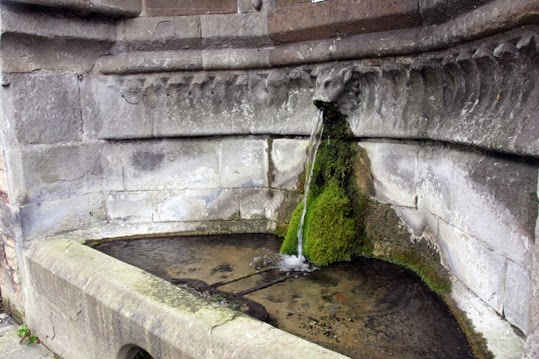 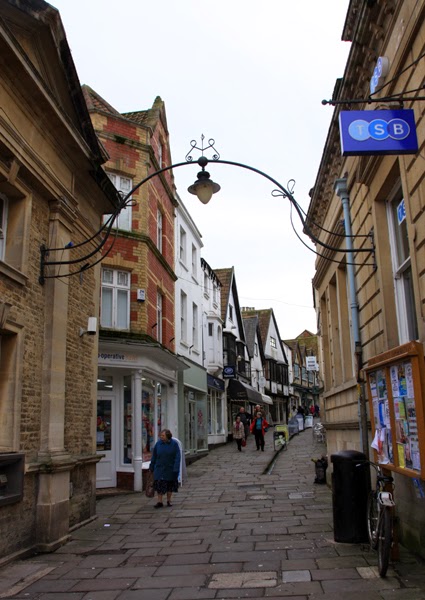 This sacred spring is in Frome, a lovely town in Somerset. I stopped off there on the way to Glastonbury last week mainly because I had found some details of the spring on The Megalithic Portal. I was on my way to visit the red and the white springs in Glastonbury, but thought I might as well visit a third spring while I was in the area.

I had no idea what Frome was like before I got there, but I was really taken with the town. It has lots of lovely arty shops in narrow, picturesque streets - including Cheap Street, which you can see in the photo to the right. That leads up to the spring and a stream from it runs down the centre of the pavement. The spring itself is set into the wall of St John the Baptist Church at the top of the hill. There is a nice coffee shop opposite it, where I sat to appreciate the view while enjoying a nice flat white.

As you can see in the photos, the weather was a bit overcast when I was there, but was still lovely. The people I spoke to said I should come back in the summer as it is even more beautiful then. I might just do that, too, as I noticed the town holds an arts festival in July. You can find out more about that here: http://www.fromefestival.co.uk/

Sadly the spring water isn't drinkable - at least according to a sign by the fountain. I don't know much about the history of the spring either. Apparently the town itself dates back to Saxon times although a hoard of Roman coins was found in a field nearby and the name Frome comes from the Brythonic word ffraw meaning fair, fine or brisk and describing the flow of the river that runs through the town.

Another intriguing fact I discovered courtesy of Wikipedia is that: "Frome is reputed to have one or more systems of tunnels beneath the streets of the older parts of the town. Some entrances are visible above ground; for example, in the wall at the top of Stony Street, with other entrances in the cellars of shops and houses. Their purpose and full extent remains unknown..." Interesting. 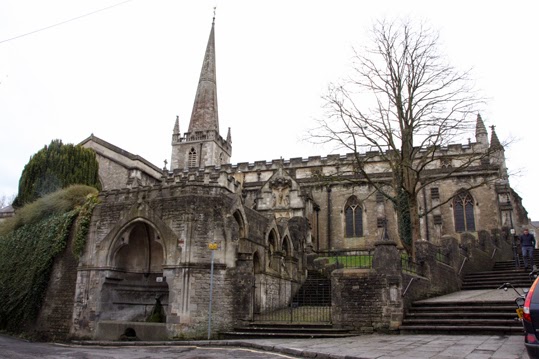