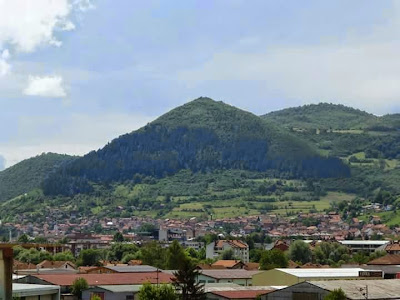 What does the photo above look like to you - a natural hill or a man-made pyramid?  There is mystery and controversy over the fascinating Visocica Hill, in Bosnia. I must admit I hadn't heard anything about The Bosnian Pyramid until I saw there was a conference about it this April in London. To find out a bit more, I looked it up on Wikipedia, where I found the photo above. I was then sent a press release about the conference, which is being organised by Marion Briggs. Here it is in full:


The Bosnian Pyramid, Visocica Hill, is the first European pyramid to be discovered and is located in the heart of Bosnia, in the town of Visoko.

It starts with a call; perhaps you see a video, go to a talk or come across someone who has been there; or maybe this conference is the first thing that draws you in. Then there comes the feeling you really must got to see for yourself. The mysterious Valley of the Pyramids in the heart of Bosnia has made its mark.

What is it about this place that people are drawn to go there time and again? What is the experience of the Bosnian Pyramids? Hear for yourself at the conference.

Speakers Include:
• Semir Osmanagić Ph.D. (Discovered the Bosnian Pyramids in 2006)
• Loraine Doherty (Symbology and sacred markings of the megaliths and Ravne Tunnels)
• Urtema Dolphin (Bosnian retreat facilitator and sound frequencies)
• Nina Earl (Archeoacoustic and electromagnetic study of the Bosnian Pyramids and the Ravne Tunnels)
• Nigel Grace (Experience of a volunteer: Rejuvenation and healing whilst working at the Bosnian pyramids and tunnels and significance of the ancient pyramidal structure)
• Bob Harris (Historical and present day significance of the material used in the building of the pyramids)
• Adrian Incledon-Webber (Energy alignments, energy patterns and processional ways in the Bosnian landscape)
• Christian Kyriacou (Alchemy of space and the music and harmonics of the pyramids in Bosnia and Egypt)
• Harry Oldfield (Experiences in monitoring the energy fields seen at the Bosnian Pyramids and other sacred sites)

Who built these colossal structures and more importantly, why did they build them? Are the builders of the underground tunnels the same people who built the pyramids?

Many experts in geology, archaeologists, scientists, dowsers and others have visited and worked on this site and over the past five years, the “Archaeological Park: Pyramid of the Sun: Foundation” has organised International Summer Camps for volunteers.

Participants have varying backgrounds, from archaeology and science, to cultural heritage, to archaeological tourism. This conference will reveal some of the results of this work and what it tells us about the consciousness of the ancient civilisation who built them and why this is vitally relevant for us today.

Tickets cost £48 and should be bought in advance via this link: https://www.eventbrite.co.uk/e/the-call-of-the-pyramids-of-bosnia-the-mysteries-of-the-visoko-valley-and-the-bosnian-pyramids-registration-15220616273

The photo of the Bosnian Sun Pyramid is by TheBIHLover and is shared under the creative commons license via Wikipedia
Posted by Badwitch at 08:00

Thank you for sharing your thoughts. I really appreciate your efforts and I will be waiting for
your further write ups thanks once again.

Greetings from Florida! I'm bored at work so I decided to check out your blog on my iphone during lunch break.
I enjoy the info you provide here and can't wait to take a look when I get home.
I'm surprised at how quick your blog loaded on my cell phone ..
I'm not even using WIFI, just 3G .. Anyhow, good blog!

Did you build this website yourself? Please reply back as I'm wanting to create my own personal website
and want to learn where you got this from or just what
the theme is called. Thanks!