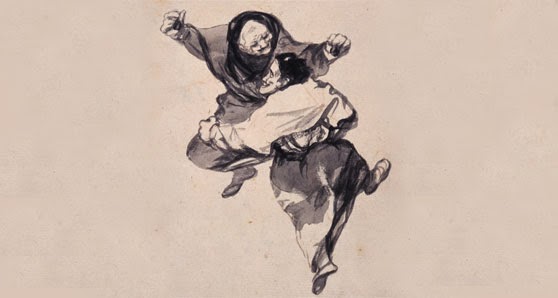 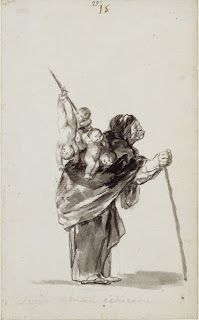 Quite by chance I learnt that there's an exhibition of pictures of witches on in London at the moment. No, not Witches and Wicked Bodies, that closed back in January. This one is of Goya's private album called Witches and Old Women and is at the Courtauld Gallery. I went to see it as soon as I could and found it very interesting.

Goya was plainly fascinated by witches. He not only painted big canvases showing them, such as The Witches' Sabbath, but as he got older he also created numerous private sketches of witches and witch-like women. The exhibition at the Courtauld Gallery reunites for the first time all of the known drawings from Goya’s private album that was specifically on this theme.

Although he draws his witches largely as traditional figures of horror, the sketches show more humour and empathy than the pictures displayed in Witches and Wicked Bodies. Although we can't know what was going on in Goya's mind at the time, I feel there is a sense that he was trying to explore his own feelings about getting old and an in some way trying to get inside the heads of those often considered to be outcasts.

A press release about Witches and Old Women explains more about the exhibition and the subject matter:


At the age of 50, the great Spanish painter and printmaker Francisco Goya (1746 – 1828) suffered a near-fatal illness that left him deaf and profoundly changed his life and work. Alongside his public role as court painter to the Spanish crown, Goya began to create albums of drawings. In these albums the artist recorded his private ideas and thoughts through drawings that often explore human nature at its most vulnerable - our dreams, nightmares, superstitions and mortality.

The albums were never intended to be seen beyond a small circle of friends. This gave Goya the freedom to create images which range from the humorous, to the macabre and the bitingly satirical. Never before have any of these albums been reunited. This exhibition is the first to do so by bringing together all the drawings from the Witches and Old Women Album.

The Witches and Old Women Album is thought to have been made in 1819-23, the period when Goya had acquired the property outside Madrid where he completed the famous murals known as the Black Paintings. With its themes of witchcraft, dreams and nightmares, the album offers an important perspective on the development of Goya’s interest in old age, the fantastic and the diabolical. Above all, the drawings reveal his penetrating observation of human nature.

The album includes a range of images exploring sleep, dreams and altered psychological states. In Nightmare, a figure tumbles headlong down a cliff face. Nightmare is also the title of a striking drawing from the Metropolitan Museum of Art, in which a mischievously grimacing crone balances on her shoulders two skeletal old men – perhaps alluding to her continuing sexual vitality. A more directly humorous treatment of sleep is evident in I Can Hear Snoring. Following his illness and loss of hearing, Goya developed a strong interest in lunacy. A powerful drawing entitled Madness shows a figure in a fool’s cap appealing to us with arms outspread whilst constrained behind a railing.

The passions and problems of old age form the final group in the album. Worn-out by age but undaunted, the elderly woman in What Folly, Still to be Thinking of Marriage dreams of an impossible future; she is part of Goya’s long critique of the subject of marriage. In She Talks to Her Cat Goya gently satirises a lonely old woman. The final surviving page of the album is also its most poignant: Can’t Go On any Longer at the Age of 98 from the Getty Museum shows an ancient figure leaning heavily on two sticks shuffling across an expanse of blank paper. This drawing exemplifies Goya’s ability to convey extraordinary subtleties of emotion, often achieved with the most abbreviated touches of ink on the paper.

The exhibition is on until 25 May at the Courtauld Institute of Art, Somerset House, Strand, London WC2R 0RN. It is open daily from 10am – 6pm. Entry is £7.50 (half price if you have an Art Pass) and tickets are available from www.courtauld.ac.uk/goya.
Posted by Badwitch at 07:30