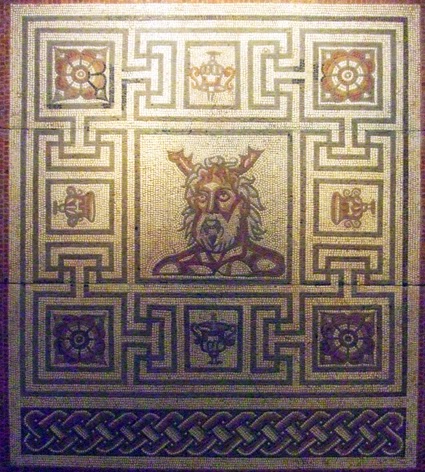 This Roman mosaic is known as the sea god mosaic, but the identity of the face in the middle is a bit of a mystery. It could be the god Oceanus. However, it might not be a sea god at all. Some people think it could portray a horned god of the woods. It was made around AD160-90 and was in a house in Verulamium, which was the third largest city of Roman Britain.

The mosaic is currently on display in Verulamium Museum at St Albans. The Museum stands on the site of the Roman town and you can also visit some of the archaeological sites nearby. Inside the museum are displays of items relating to all aspects of everyday life in Roman times, including activities at temples and shrines.

So, what god do you think is depicted in the mosaic?