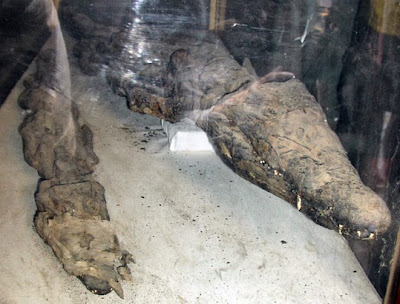 
"The team investigate the use of modern medical technology to scan Egyptian animal mummies from museums across the world. By creating 3-D images of their content, experts are discovering the truth about the strange role animals played in ancient Egyptian belief. This episode of Horizon meets the scientists working in Egypt who are exploring the ancient underground catacombs where mummies were originally buried to reveal why the ancient Egyptians mummified millions and millions of animals."

The programme is on Monday 11 May at 9pm. You can find out more and see clips here: http://www.bbc.co.uk/programmes/b05vn777

The picture at the top shows mummified crocodiles, which I photographed in Egypt at the Temple of Sobek, the crocodile god.
Posted by Badwitch at 09:26