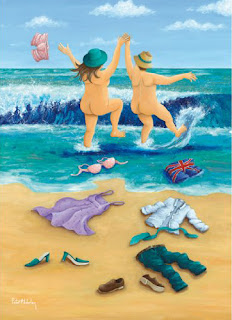 Like quite a few people I know, I seriously disliked the message put across in the recent controversial advert for a slimming product, featuring a bikini-wearing model and asking: “Are you beach body ready?”

It implied that women should only go to the beach if they look like an improbably thin 20-year-old with silicon boobs. Ridiculous, of course. And I was really pleased to learn most women in the UK also think that idea is ridiculous.

According to research, it appears British women are becoming happier in their own skins than in previous decades, shunning those heavily made-up looks we see in celebrity selfies or the artificial images in adverts.

In the survey commissioned by beauty retailer QVC to celebrate June Beauty Month, 68% of women stated they would not want to emulate a celebrity beach look. However, the research did show that women aren’t completely unconcerned about what they look like in their swimming costume. In fact about 28% of the women surveyed said they have a complete make-over before going on holiday - including manicures, pedicures, facials and applying fake tan. For most women, the things they least want to show on the beach are excess hair, sunburn and a costume that goes transparent when wet.

I think that pagans – maybe Wiccans in particular – are less concerned about others seeing our naked flesh than the general populace. After all, tradition in Wiccan covens is to perform rituals naked whenever possible and I have been to some lovely summer celebrations on beaches where nudity is allowed. Both Gerald Gardner, the founder of modern Wicca, and Ross Nichols, who founded the Order of Bards, Ovates and Druids were keen naturists. Their belief that working skyclad is the best way to show perfect trust and honesty has had a lasting impact on paganism.

After attending a few skyclad rituals you realise that pretty much everyone has wobbly bits, scars and stretch marks, but I think even pagan women still have some concerns about wanting to look good naked. I will admit I scrupulously shave my legs and armpits before showing them to anyone who isn’t immediate family. I’ve also been known to apply a little fake tan to my skin, which is otherwise pasty white after being covered up throughout the English winter and spring.

Even off the beach, I don’t like to be seen looking a total scruff. A couple of weeks ago I was working from home and slobbing. Then I realised I need to pop to the shops. I went out wearing one red sock and one blue sock, yoga pants that were too short and speckled in cat fur, no bra under my T-shirt, no deodorant, unwashed hair and I hadn't even put in my false tooth (I knocked out a tooth in a car accident years ago). I wasn't expecting to bump into anyone I know, except I did. I bumped into a pagan friend who lives locally. I should have known a real friend wouldn’t care how I looked, but I felt so embarrassed I made a hasty excuse and rushed out of the shop as fast as possible.

I don’t feel proud of myself for that. I don’t even feel proud of my need to shave my legs before baring them in public. I know I should be able to feel comfortable in my natural skin – warts, hairs and all - on the beach or anywhere else. But, I doubt that I will ever be able to completely shake off the social conditioning that says women should look a certain way.

The picture is from a greeting card: Skinny Dippers by Peter Adderley Card