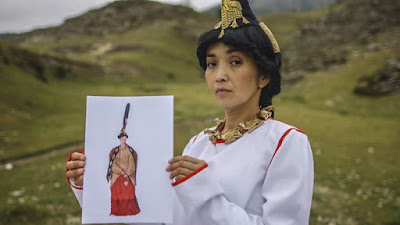 There are several things on the telly this week of witchy, magical or pagan interest:

Doctor Who
Doctor Who restarts tomorrow on BBC1. The first episode in the new series, at 7.40pm on Saturday 19 September, is called The Magician's Apprentice. Apparently it is a two-parter and the second part, the following Saturday, is called The Witch's Familiar. There is a spoiler-free review here: http://www.denofgeek.com/tv/doctor-who/36911/doctor-who-the-witch-s-familiar-spoiler-free-review

The Crossrail Discovery: London's Lost Graveyard
Channel 4 documentary at 7pm on Sunday 20 September about the 300-year-old graveyard at Crossbones that was discovered during the building of a new railway line in London. As most London pagans know, a memorial garden is now open at the site and there are regular monthly rituals there. The TV programme was first shown in July and you can find out more here: http://www.channel4.com/programmes/crossrail-discovery-londons-lost-graveyard

The Incas: Masters of the Clouds
First in a two-part documentary looking at the achievement of the Inca empire. It is on BBC4 at 9pm on Monday 21 September

The Ascent of Woman
Final part of a series exploring the role of women in ancient times. It is on BBC2 at 9pm on Wednesday 23 September. This episode looks at modern times, but earlier ones looked at the ancient world, goddesses and religion and are must-see viewing for anyone who is a pagan or a goddess-worshipper. You can find out more and watch the series here: http://www.bbc.co.uk/programmes/b0693dsh

The picture at the top shows Ascent of Woman contributor Aisula holding an image of the Ukok Princess, Altai Mountains, central Asia.
Posted by Badwitch at 07:41