A Dream of Gifts and a Visit from the Dead 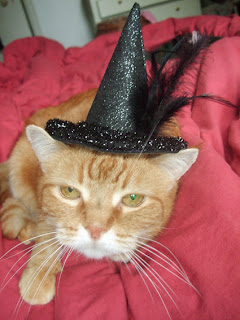 Here is a little ghost story for October 1 - the start of the month that ends in Samhain, when the veil between the worlds becomes thin:

Last night I dreamt that my cat Jerry, who died just over a week ago, came back to me.

But the postman was insistent and a large ginger cat nipped through the open doorway into my hall. I looked at the cat suspiciously, and the cat looked up at me with big eyes, and I recognised my Jerry - a bit skinny but healthy looking and very much alive. I stroked his head and he purred and purred.

Of course, dreams tap into all sorts of things that are going on in your head. My husband had bought me a take-away pizza last Saturday night. It was a rare treat because normally we are so skint we don't order take-away food.

The tarot deck delivery also made sense. Last week a lovely friend had sent me a gift of a tarot deck - The Mystic Faerie Tarot

- to cheer me up because I had been having a rough time of late. It is a really beautiful deck and I was so touched by my friend's kind thoughts.

And, of course, people are often visited in their dreams by loved ones and pets who have passed through the veil of death. Whether it is a real connection or anything more than wishful thinking, I don't know. But I would like to think that Jerry would visiting me from the spirit world to tell me he was OK if he could.

The picture at the top shows my cat Jerry a few years ago, wearing a small witch's hat.