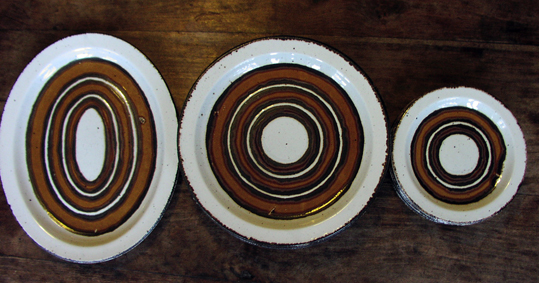 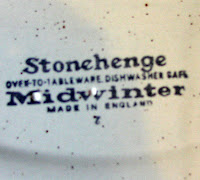 Now I know 1970s style isn't everyone's taste, but I have to admit some of it reminds me of my childhood in a cosy, nostalgic kind of way.

When I saw this Midwinter Stonehenge dinner service in a charity shop for £15, I had to buy it. It consists of 6 dinner plates, 6 side plates and an oval serving plate

The name alone makes it perfect for serving up a winter solstice feast on - much more to my taste than the chintzy Victorian porcelain set I inherited from my grandma, which I've used at Yule in the past.

However, the Midwinter name on the dinner service isn't actually referring to the pagan festival in the wheel of the year, it is named after the potter behind it, Roy Midwinter.

Looking it up on a Pottery Histories webpage, I learnt that it the range is a design icon of the 1970s. The Midwinter factory started in the 1950s and 60s, but merged with J. and G. Meakin in 1968 and then became part of Wedgewood. The website said: "As part of Wedgwood, Roy Midwinter remained at the head of his former family business and in 1972 Wedgwood launched the Roy Midwinter-designed Stonehenge range of oven-to-table ware."

Looking on Ebay and Etsy, it seems I got a reasonable bargain too, as a couple of plates alone can go for about what I paid for 13 items. Thirteen certainly wasn't such an unlucky number for me when I found it.

Do you think it was called Stonehenge because it's fairly chunky?

I thought it might be the circular design was a reference to the stone circle....but some of the other designs in the range aren't like that

Those are exactly the things I've been wondering too...