Festival of the Week: St Lucya or Lucia's Day 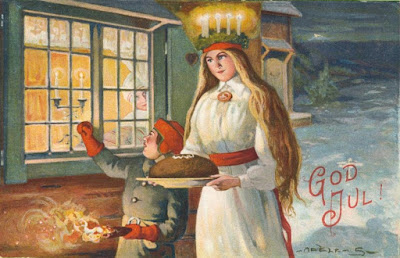 Tomorrow is my name day. My name is Lucya and December 13 is St Lucya's Day in Poland, where my father came from - and it is a festival celebrated widely in many countries.

In Scandinavia and Italy it is called St Lucia's Day, and in England it is more often called St Lucy's Day - but they are all really just variant spellings of the same name. The feast of St Lucya, Lucia or Lucy also at one time coincided with the Winter Solstice - the shortest day of the year before calendar reforms - and is a festival of light.

St Lucya/Lucia/Lucy is usually represented as a girl or young woman in a white dress and red sash with a crown or wreath of candles on her head. In parts of Northern and Eastern Europe, modern customs on December 13 often include a procession led by a girl dressed as Lucia carrying cakes. Songs are sung and other girls and boys take part in the procession too, playing various roles associated with Christmas. It is said that celebrating St Lucia's Day will help you get through the long winter days with enough light.

I can recall once being dressed up like that when I was a very little girl, after my aunt explained to me the meaning of my name and my name's day. Lucya means light. Name days are celebrated in Poland as much as birthdays - or so I have been told. Although my father's family came from Poland, I've only ever visited as a tourist and never lived there. However, I do wonder if the meaning of my name has something to do with my love of everything to do with candles and candle magic, leading me to have written my own book on the subject: Pagan Portals - Candle Magic.


In Sweden St. Lucia's Day was formerly marked by some interesting practices. It was, so to speak, the entrance to the Christmas festival, and was called “little Yule.”﻿ At the first cock-crow, between 1 and 4 a.m., the prettiest girl in the house used to go among the sleeping folk, dressed in a white robe, a red sash, and a wire crown covered with whortleberry-twigs and having nine lighted candles fastened in it. She awakened the sleepers and regaled them with a sweet drink or with coffee,﻿ sang a special song, and was named “Lussi” or “Lussibruden” (Lucy bride). When everyone was dressed, breakfast was taken, the room being lighted by many candles. The domestic animals were not forgotten on this day, but were given special portions. A peculiar feature of the Swedish custom is the presence of lights on Lussi's crown. Lights indeed are the special mark of the festival; it was customary to shoot and fish on St. Lucy's Day by torchlight, the parlours, as has been said, were brilliantly illuminated in the early morning, in West Gothland Lussi went round the village preceded by torchbearers, and in one parish she was represented by a cow with a crown of lights on her head. In schools the day was celebrated with illuminations.﻿

What is the explanation of this feast of lights? There is nothing in the legend of the saint to account for it; her name, however, at once suggests lux﻿—light. It is possible, as Dr. Feilberg supposes, that the name gave rise to the special use of lights among the Latin-learned monks who brought Christianity to Sweden, and that the custom spread from them to the common people. A peculiar fitness would be found in it because St. Lucia's Day according to the Old Style was the shortest day of the year, the turning-point of the sun's light.﻿

In Sicily also St. Lucia's festival is a feast of lights. After sunset on the Eve a long procession of men, lads, and children, each flourishing a thick bunch of long straws all afire, rushes wildly down the streets of the mountain village of Montedoro, as if fleeing from some danger, and shouting hoarsely. “The darkness of the night,” says an eye-witness, “was lighted up by this savage procession of dancing, flaming torches, whilst bonfires in all the side streets gave the illusion that the whole village was burning.” At the end of the procession came the image of Santa Lucia, holding a dish which contained her eyes.﻿ In the midst of the piazza a great mountain of straw had been prepared; on this everyone threw his own burning torch, and the saint was placed in a spot from which she could survey the vast bonfire.﻿

In central Europe we see St. Lucia in other aspects. In the Böhmerwald she goes round the village in the form of a nanny-goat with horns, gives fruit to the good children, and threatens to rip open the belly of the naughty. Here she is evidently related to the pagan monsters already described. In Tyrol she plays a more graceful part: she brings presents for girls, an office which St. Nicholas is there supposed to perform for boys only.﻿

In Lower Austria St. Lucia's Eve is a time when special danger from witchcraft is feared and must be averted by prayer and incense. A procession is made through each house to cense every room. On this evening, too, girls are afraid to spin lest in the morning they should find their distaffs twisted, the threads broken, and the yarn in confusion... At midnight the girls practise a strange ceremony: they go to a willow-bordered brook, cut the bark of a tree partly away, without detaching it, make with a knife a cross on the inner side of the cut bark, moisten it with water, and carefully close up the opening. On New Year's Day the cutting is opened, and the future is augured from the markings found. The lads, on the other hand, look out at midnight for a mysterious light, the Luzieschein, the forms of which indicate coming events.﻿

In Denmark, too, St. Lucia's Eve is a time for seeing the future. Here is a prayer of Danish maids: “Sweet St. Lucy let me know: whose cloth I shall lay, whose bed I shall make, whose child I shall bear, whose darling I shall be, whose arms I shall sleep in.”﻿

Although some of those customs are quite Christian, there's certainly a suggestion that the festival of light combines elements of Christianity with older pagan traditions and that St Lucya, Lucia or Lucy might have been an ancient Pagan goddess of light. If anyone knows more about that, do leave a comment.

For modern celebrations - pagan or Christian - it would be much too dangerous to put real candles on any kind of headwear, particularly that worn by children. Modern St Lucias normally have battery-powered candles in their crowns. Not as atmospheric, but no one wants their hair to catch alight.

If you fancy celebrating St Lucy's Day in London, visit the Swedish pop up store Gudrun on 32 Marylebone High Street, London on 13 December. There will be a ‘Lucia bride’ dressed in white, with a candle headdress, leading a choir of handmaids in procession. If you are in America, the Gudrun store in New York is having a St Lucia celebration today, December 12, at 4pm. You can find out details of both here: http://www.gudrunsjoden.com/uk/gudruns-world/fun-in-store-en