Ghost Hunting in London on a Paranormal Activity Tour 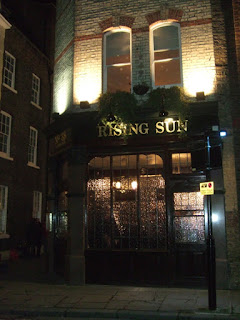 like the one in the Harry Potter books? Well, Friday was like that. There was just so much going on.

I wasn't able to get to the Saturnalia party at Atlantis Bookshop - although I did pop in to say hello earlier in the day, and also said hello at Treadwell's down the road.

I popped in briefly to the British Museum, where there was an evening of free performances and workshops, but only really had time to see the Sobek exhibition and find a friend I'd agreed to meet there.

The reason I had to miss all those things was that ages ago myself, a witchy friend and my hubby had booked up to go on a paranormal activity tour of London. It was run by Lantern Ghost Tours and the description said:


It's no secret that London is pretty haunted city and many Londoners have joined us for our Haunted Pub tours. On more than one occasion some very strange, spooky and unexplained things have happened inside the pubs. So we've decided to find out how. Join us on a series of investigations on the hunt for ghosts, poltergeists, energy and other forms of paranormal or supernatural oogie boogie. We use Ouija boards, K2 meters and dowsing rods to uncover the stories of murder, a 15th century jester and judge who never left his court house.

Our investigation leader from Lantern Ghost Tours is a paranormal pro and will take charge as the Best LDN Walks guide will tell you the stories behind the legend of the ghosts, poltergeists and introduce you to England's most prolific and unheard of serial killer. 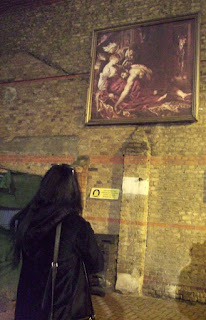 Now, I've been on quite a few guided walks of London and a few ghost hunts in my time, but this managed to merge the two very well and in a way I'd not experienced before. It also introduced me to a few unusual London sites I'd not heard of, which is pretty good going as I consider my knowledge of London to be good. The first was a courtyard that you can see in the photo just to the left.

What you can see in the picture is a modern street art reproduction of Ruben's Samson and Delilah high on the courtyard wall, but in Victorian times it was the scene of a horrible murder, The ghost of a young woman is reported to have been seen and heard there ever since.

The pub in the photo top right is supposedly haunted by the ghost of a regular customer who was a letch, by all accounts, and continues his activities after death. My witchy friend and I did experience some interesting activity while we were there. Whether it was a ghost or just the wind, I can't say for sure.

I won't describe all the places we visited - that would spoil it for those who also want to do the tour - but I will say the best was left to last. It was another pub - and certainly one with some memorable spirits of the alcoholic kind, as it was an old gin palace. The hot mulled gin was wonderful on a cold night too.

But after a tipple or two in the bar, we headed down into the cellar, which as well as containing barrels of beer, had several doorways leading into actual cells from historic Newgate Jail. Obviously they don't contain living prisoners any more, but the ghosts of dead ones are said to remain captive there still. You can see a Ouija board set up in a cell in the photo below.

The tour was so interesting that I didn't mind having missed the other events that night. The two people who were with me - my witchy friend who sees dead people and my sceptic husband - both said they enjoyed it. I think that shows it was pitched so that everyone from fully kitted-out ghost hunters to those just wanting some spooky fun can get what they want from it. 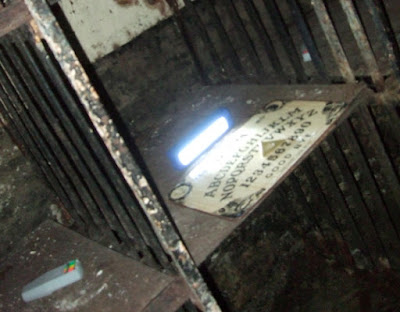