Solstice Eve: The Hooded Man and the Hermit in Tarot 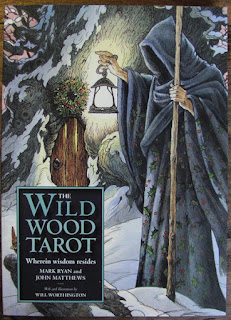 The card depicts a lone figure standing before an ancient oak tree. Thick snow covers the ground. The Hooded Man is dressed in a cloak covered in evergreen holly. It is night-time.

The Wildwood Tarot book goes on to say: “Associated with the Earth and the dark sun, this is the time of solitude and contemplation.”

I think many of us feel the darkness at this time of year as something almost palpable. The commercialisation of Christmas tells us we ought to be full of happiness and cheer, but so often we aren’t. It is particularly harsh for those living alone, especially the elderly.

The Hooded Man holds a lantern that illuminates a door, hinting at a safe haven and a way out of darkness and into the light. On one level, this can represent the secular holiday that lies ahead on 25th December – a time to rest and relax with family, to eat too much and enjoy the entertainments of the day. But, on another level, it means much more than that. The Wildwood Tarot description says: “It is the gateway of the dead and rebirth, the womb of the Earth”

The Hooded Man is more commonly depicted as the Hermit and modern tarot interpretations for the card often say that the Hermit represents a wise teacher or a time for contemplation, appreciating our own company or a desire to seek greater meaning in life. That is all quite at odds with the way Christmas is represented these days – a time for partying, being sociable and having fun.

Yet that to me sums up the difference between what I do as a pagan at the time of the Winter Solstice on 21st or 22nd December, and what I do to celebrate Christmas with my family a few days later on 25th December. 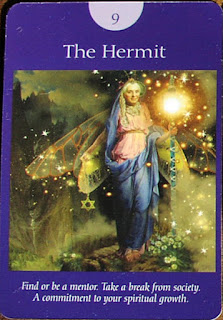 I do like to spend time alone around the Solstice. I like to go for quiet walks in winter woods away from the crowds. I also like to spend time alone meditating – often with a single candle or, indeed, a candle lantern like the one the Hermit holds. I remember my ancestors who have died and I let the ghosts of Christmases past show me memories of times gone by. I also contemplate the present and take stock of what I have, then look to the future and what I must work towards in the year to come.

Once I’ve done that, I can more easily move on and enjoy the company and celebrations of the festive holidays in the days ahead.

It is also worthwhile noting that in the Rider-Waite-Smith deck, an older meaning of the Hermit is “Prudence, circumspection; also and especially treason, dissimulation, roguery, corruption.”

That might seem at odds with the more usual interpretations given today, but winter is a tricky time quite apart from the harshness of the weather. Burglars, fraudsters and other crooks look on this as a bumper season for criminal activities. It really is worthwhile being prudent and cautious.

The Hermit’s Lantern
As I mentioned earlier, the hermit is nearly always depicted holding a lantern and this holds a particular resonance for me because my book – Pagan Portals Candle Magic – is due to be published early in 2016. I’ve already arranged a launch party at Treadwell’s Bookshop on January 29th.

More than any other card in the tarot, the Hermit is the card of candle magic. The candle lantern he holds represents lighting the way forward, particularly on a spiritual path. It also represents magical power that we can use to hold darkness at bay and lead us to the door of self-knowledge.

This Winter Solstice, my personal meditation by candlelight will be upon the image of the Hermit in his - or her - many guises, and I will see where he or she leads me as the longest night ends and the year turns.