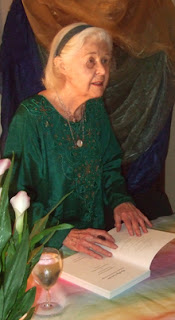 Late last night I heard the news that a wonderful Wiccan elder, Jean Williams, had died. This morning the news was spreading through pagan groups so I hope it is OK to write a short obituary here.

Jean Williams and her husband Zach Cox were initiated as Wiccans in the 1960s. Jean became the High Priestess of Gerald Gardner’s coven in the mid-1970s. I met her on a few occasions and found her to be absolutely lovely as well as extremely knowledgeable about the Craft.

Only this summer, I went to the launch of Jean and Zach's book The Play Goes On: The Rituals of Rainbow Bridge

at Treadwell's in London. The photograph on the left shows her signing her book at the event. You can read my write-up of the event here: http://www.badwitch.co.uk/2015/08/launch-party-for-play-goes-on-at.html

An interview with Jean Williams appeared in Wiccan Rede in 2014: http://wiccanrede.org/2014/07/pathfinder-extraordinaire-an-interview-with-jean-williams-part-1/

Jean will be very much missed.
Posted by Badwitch at 13:13