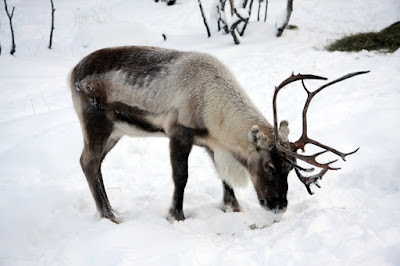 Tonight at 7pm on BBC4 there's another chance to watch a beautiful two-hour sleigh ride with Sami women and reindeer through Norway's frozen landscape. All Aboard! The Sleigh Ride was previously shown on December 24. I found it absolutely captivating - although deliberately slow. Do watch until the end as the last few minutes show the Northern Lights in the sky above a traditional Sami tent. Breathtaking!


At 9pm tonight on BBC4 there is a documentary called Reindeer Girls: Natural World. It is about two cousins from the reindeer-herding Sami people.

Tomorrow, December 27, at 8.30pm there is a drama about paranormal investigator Harry Price on ITV. It is called Harry Price: Ghost Hunter.

The picture at the top is one I took of a reindeer when I was in Norway.