I Treated Myself to this Lovely Pentacle Candle Lantern 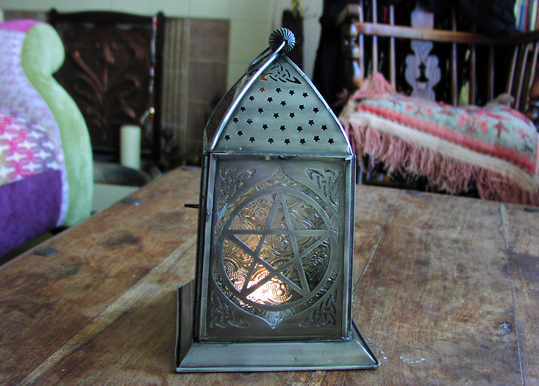 When my book Pagan Portals - Candle Magic was officially launched last Friday I decided to celebrate by treating myself to a little gift. Well, I also celebrated with few drinks in the pub with some lovely friends and had a jolly fine evening - but I *also* ordered myself a gift.

It arrived this morning and you can see it in the photo above - a candle lantern with a pentacle in the centre of the glass.

Now, you might think I already have a lantern just like that - you can see it in the photo I took for the front cover of my book. Actually, it wasn't mine. I borrowed that lovely lamp from a sister in the Craft. The large pillar candle and the antique candle holder belonged to me, but not the lantern. 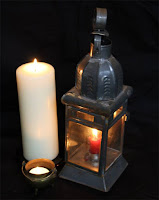 I did try taking a few initial photos with one I already owned, including the one on the left, but I thought it quite witchy enough for my cover image.

I was very sad when I had to hand the lovely pentacle lantern back to my friend, but am delighted to have one myself now.  I ordered it via Amazon, although the description on the shopping site called it pentagram lantern candle holder

rather than a pentacle lamp or lantern.

Although the words pentagram and pentacle are often considered to mean the same thing - a five-pointed star - in Wicca and many other forms of modern paganism, a pentagram is the star on its own while a pentacle is a pentagram enclosed in a circle. That's why I would call this a pentacle lantern rather than just a pentagram lantern. The pentacle is a symbol of protection.

The lamp arrived in the post this morning and as you can see I tried it out as soon as I had unpacked it from the box.

You can order Pagan Portals - Candle Magic: A witch's guide to spells and rituals

through Amazon or Treadwell's Bookshop. You can order the pentagram/pentacle lantern via Amazon.