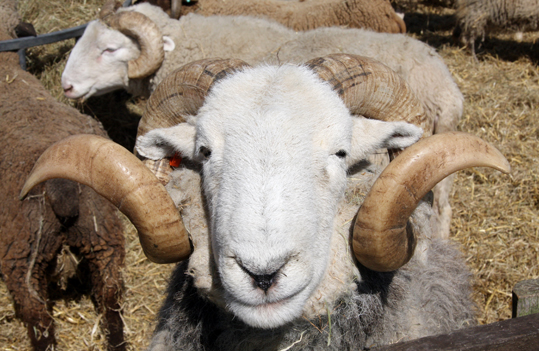 If you are someone who hates having to go to work on a Monday morning, the fact that this Monday morning is Leap Year Day must surely make it worse. For those on a regular monthly salary, working a 29-day February brings in just the same paycheck as a normal 28-day one.

Not fair, is it? In fact, some people have called for Leap Year Days to be made bank holidays - which I am all in favour of.

If you are wondering why there is a photo of sheep at the top of this post, it is because in Scotland shepherds consider leap years to be unlucky. A Scottish saying is: "Leap year was ne’er a good sheep year."

In Italy, leap years are considered back luck in general. Italians say: "anno bisesto, anno funesto", which translates as "leap year, doom year." I've never noticed leap years to be particularly unlucky myself, but maybe that's because I'm not Scottish, Italian or a shepherdess.

Of course the most famous folklore about Leap Year Day is that women are allowed to propose marriage then. Maybe that tradition still helps very shy women pluck up courage to pop the question, but to be honest it doesn't seem that important now. I guess it was more of a big deal in Victorian times - although Steve Roud is of the opinion it is more of a myth than a genuine old custom of the English year.

If you are going to give it a go apparently you should wear a red petticoat or trousers when you ask, and if a man says no they are supposed to take you shopping for clothes to make up for it. Fine gloves and silk frocks were the favourite consolation prizes in times of yore, according to folklore.