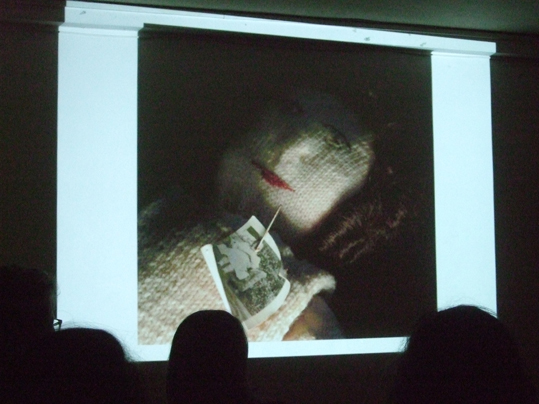 Here's a photo of a slide of a photo containing a photo - which I took from my seat in the audience at Sara Hannant's illustrated lecture at Treadwell's last night.

Sara Hannant is a much better photographer than I am though, and her talk was all about the pictures she took as resident photographer at the Museum of Witchraft in Boscastle, Cornwall. Some of these are due to appear in a book by Sara and museum director Simon Costin, called Of Shadows.

I've been a fan of Sara's work for some time and I've blogged about her previous exhibitions on the English ritual year and Numinous - Clouties transformed. While folklore fascinates me, witchcraft is a subject closer to my own heart and I was really excited to get a preview of some of the images from the new book and find out more about Sara's thinking behind the project.

Sara explained that the things she selected to photograph were ones that intrigued her as well as demonstrating the wide range of items in the museum. They included dolls, wands, statues, daggers, pendants, robes and amulets. Some had been displayed at the museum for years, while others had languished in the archives.

She first tried to photograph them during daylight, but found that didn't create the right atmosphere to truly bring out the essence of the objects. On her own website, Sara explains: “It was best to photograph at night. This enabled the objects to emerge from the darkness, where it is said magic begins."

She goes on to say: "Superstition and magic have encircled photography from the beginning. In many cultures, the word for photography/photographer translates as ‘soul taker’, ‘shadow catcher’, or ‘face stealer’. The camera itself was perceived as a magical object, and photographs were thought to possess supernatural powers.”

The photo at the top shows a poppet, or magical doll, with a photograph of a person attached to it with a pin driven through the face to the doll's heart. It is an example of how the power of an image can be used in magic. One can imagine that whoever did that spell really wanted to cause someone harm. Sara said that many of the poppets in the Museum of Witchcraft collection appeared to have been used for curses, although some were for other purposes, such as healing.

Of Shadows is due to be published in May and you can pre-order copies from Treadwells by visiting the shop at 33 Store Street, Bloomsbury, London WC1E 7BS, calling 020 7240 8906 or via the website http://www.treadwells-london.com/