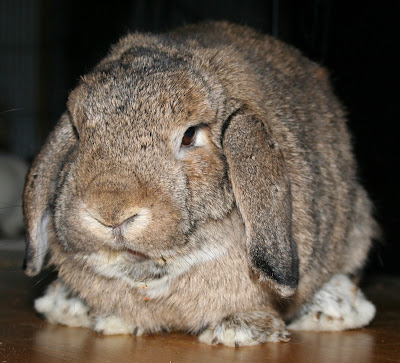 So many pagans are enamoured of hares, but hardly give a thought to the humble rabbit. Well, I thought I should redress that balance because today is the start of Rabbit Awareness Week. Oh, and I was also sent a press release with a picture of an adorable but grumpy looking rabbit that I couldn't resist sharing.

Of course we all know quite a bit already about what these incredibly common creatures get up to in the wild. They were introduced by the Romans as a popular thing to eat, they are sociable creatures that live in burrows and breed like, well, rabbits, to the point of being a bit of a pest. The ongoing battle between farmer and bunny is the stuff of many tales. And, of course, they are a major food source for many of our other wild creatures, including birds of prey.

According to Chris Luttichau in the book Animal Spirit Guides: "Rabbit is a great animal benefactor and all predators, including humans, hunt rabbits in order to eat and live. The medicine of rabbit is humility - knowing your ability and your role and accepting both happily."

But because rabbits breed so fast, they also represent fertility - including the fertility of the land. Chris Luttichau says: "This wealth of procreation gives her a role similar to that of Mother Earth."

But so much for wild rabbits - what about bunnies kept as pets? The press release I was sent with the photo at the top is about how half of the pet rabbits kept in the UK are apparently lonely and stressed.

UK veterinary charity, PDSA, has released statistics that show more than 55 per cent of rabbit owners are worried about behaviour in their pets, including biting the bars of their run or hutch repeatedly, fur pulling, biting, growling and hissing. The PDSA's latest animal wellbeing report showed that with more than 680,000 rabbits living alone, despite being highly sociable animals, and thousands more living in small hutches with no opportunity for exercise or mental stimulation, many are unhappy.

PDSA veterinary surgeon Rebecca Ashman said: “Our figures highlight that lack of mental stimulation can have a huge impact on pet behaviour. What’s most frustrating is the fact that many of these issues could easily be avoided if rabbits were given the right conditions, diet and companions to live alongside.”

As a charitable partner in this year’s RAW, which runs from 18 to 26 June 2016, PDSA is backing RAW’s #BuddiesForBunnies campaign to get solitary rabbits paired up with suitable companions from rescue centres. The charity says the findings should be a ‘call to action’ for the 57 per cent of rabbit owners who own single rabbits.

Ashman added: “Pets do so much to enrich and improve our lives, but by not meeting their needs, their physical and mental wellbeing can be severely compromised. Sadly, rabbits seem to be the forgotten pet. They can’t speak up and tell us if they’re unhappy, but with the right information and education, owners can make positive changes to their pets’ lives.”

Rabbits are not solitary creatures - by nature, they live in herds, unlike hares, and need companions. And, seeing as humans are omnivores, and a bit big and scary, we aren't always the best fit. Rabbits should always be adopted in pairs, as well as given plenty of space to roam free at all times.

I have two precious lil' buns of my own and, as limited as the space in my apartment is, I always make sure that they get plenty of exercise. Although, I have to say that they seem to get along with the cats better than they do amongst themselves. :)

Yes, they are very sociable!