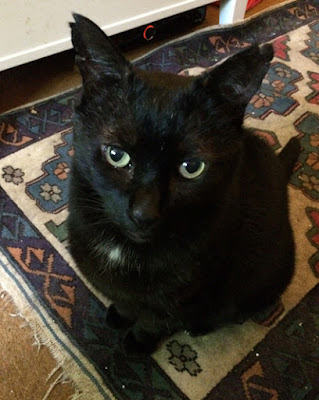 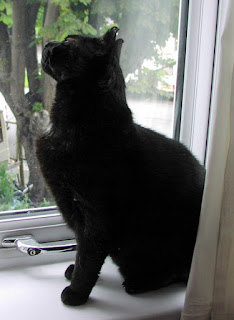 I have a new cat. His name is Pharaoh and he is a battle-scarred old Tom, but he has the gentlest temperament with humans.

Poor Pharaoh was found living rough under a bush in a back garden. He is at least eight years old and no one knows anything about his past before that - although he was obviously once a house cat because he is very tame. Pharaoh is mostly black, but with a small white tuft of fur on his chest. He has torn ears and numerous other scars, but is otherwise very healthy.

Pharaoh is very friendly and immediately made himself at home when I brought him back from the Cats Protection fosterer who had been looking after him. I had originally been intending to get a new kitten, but I fell in love with this old boy and his sad story as soon as I saw him.

The photo at the top was taken at the foster home I collected Pharaoh from yesterday, the one at the side shows him proudly sitting in my windowsill.

So, so sweet! And of black fur - what could be more witchy? ;)
Few would adopt a senior cat, as sad as it is. May you bring each other plenty of joy and love.

Handsome chap! Bless you for giving him a furever home <3 xx

Thank you! He spent most of the day sleeping on a chair, but likes to have his head rubbed from time to time.