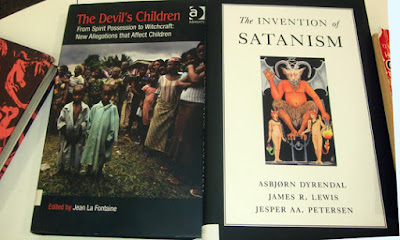 Last week I attended the conference on the UK Satanic Abuse Scare: 25 Years On at the London School of Economics on Tuesday, organised by information charity Inform and pagan bookshop Treadwell’s.

The Satanic Ritual Abuse Scare began when a small group of charity and social workers, mostly fundamental Christians, were influenced by material circulating in America stating that an international network of Satanists were sexually abusing children as part of their rituals – raping young girls, then aborting foetuses and sacrificing them. Although this was eventually found to be completely untrue, it lead to high-profile cases in Rochdale, Nottingham and the Orkneys in the UK, in which children were taken into care because their parents were alleged to be members of this ring of Satanic abusers. I’ve already blogged about the role of the media in the panic. However, it was a report by one anthropologist, Jean LaFontaine, that effectively ended the scare.

Jean LaFontaine is now Professor Emeritus of the London School of Economics and board member of information charity Inform. She gave the first talk at the UK Satanic Abuse Scare: 25 Years On conference, and spoke about the factors that lead to false claims of Satanic Ritual Abuse developing into an international panic. Here is my write-up of the talk.

In the 1980s, Jean became involved in investigating these “extraordinary cases” when she was asked to attend a conference in Cardiff on witchcraft. Delegates there included vicars and psychiatrists. Two social workers from Nottingham made a presentation of children’s drawings, which they said showed they had been abused by Satanists who raped them and murdered their babies.

Jean was asked to find out more about it. She was brought up in Africa, which has long had witchcraft traditions, but had lived in England for so long she did not expect to find witchcraft in the UK. But, at that time in the 1980s, newspapers were reporting that children were being killed and raped in black magic and witchcraft rituals in the worship of Satan. British TV carried stories linking sexual abuse of children with cultists – it came across as an international conspiracy as cases came up in other countries too. There was an assertion of a whole range of unspeakable acts. Allegedly the acts were done by people in robes and masks, but no one had seen them. They were supposed to be very powerful people who could protect themselves. One charity spokesman said at least 4,000 kids were ritually abused in UK.

While most of the UK cases ended in 1990, there were still 10 new cases in 1991 – the year that Jean’s report on the matter was published, showing that Satanic Ritual Abuse (SRA) was actually not taking place at all. [You can find more about the report, under the title Study of Childhood Ritual Abuse in the UK here: http://www.religioustolerance.org/ra_rep01.htm] However, Jean said that some cases still get talked about, and accusations of ritual abuse have not stopped.

In trying to explain the original outburst, underlying social patterns are the main factor. Other factors are ideas and the people who spread them. Regarding the media, Jean said it is clear that the concept of SRA was spread to the UK from the US. For example, Sandi Gallant was an American cop who was interviewed about cults and said that Satanists were abusing children in nursery schools in the US.

The very start of the SRA panic is linked to a woman called Michelle, who co-wrote a book in 1980 called Michelle Remembers, with her psychiatrist Lawrence Pazder. She alleged that she was riutally abused and kept in a cage when she was five years old, but was rescued by a vision of the Virgin Mary. [Michelle Remembers is now considered a classic book based on false memories.]

Other books came out about SRA and the idea caught on. Some people became campaigners who wanted to tell people that children were at risk. Some were Evangelical Christians.

To begin with, UK campaigners included Maureen Davies – then a member of Reachout Trust, an evangelical organisation dealing with information. Although Reachout Trust itself was not very extreme, it associated with other groups that were. Maureen became an expert for Beacon and worked hard between 1989 and 1992, teaching about what she saw as the perils of SRA. She tirelessly attended conferences, seminars and study groups, she wrote articles for social work magazines and visited the US where she was filmed.

However, not all of the campaigners were Evangelical Christians – some were journalists and many were social workers. What they said and the articles they wrote were prominently displayed in the media. Newspapers seized on SRA and a “feeding frenzy” encouraged reporting of cases because of its sensationalist content – sex, murder, black magic etc.

Campaigners, journalists and those who said they were victims wrote many books about it – some aimed at teenagers. So cross contamination took place between what people said and the books written. At the end of this period, there was another spectacular change – the way in which therapists took over from social workers and because of new sources of information. Some “victims” had years of therapy, which resulted in them claiming they had been abused [due to controversial recovered memories]. When questioned about the lack of physical evidence, one therapist said that evidence of baby sacrifices were destroyed in portable incinerators run off car batteries even though the rituals took place out in the woods.

The earliest alarms about ritual abuse involved pagans in the allegations – Wicca especially because Wiccans are witches. Campaigns by the Pagan Federation managed to stop mention of witches and pagans in newspapers quite quickly, so journalists turned to Satanists for their headlines.
None of these allegations were true; however, harm was done to children for the reason of confronting evil. One reason for this is that there is a cultural concept of evil – the Christian view of good and evil. In Rochdale, children were abused and parents had been abused by the very systems that were trying to save them from SRA.

Jean asked, “How do you explain why people would do that?” She went on to say that many social workers were confounded, but the thought of a satanic cult was an explanation that helped them understand what was going on. This continuity was accompanied by the idea of conspiracy of secret groups – historically heretics, those dedicated to the destruction of society. The idea of such secret and powerful groups goes back a long way into history. The rise of Evangelical Christianity continues to support the notion of evil creatures that are connected with the Devil. Exorcism is on the rise – and children are often now exorcised because they are thought to be possessed.

In summary, Jean said that her reports helped silence the media of SRA by proving that it wasn't taking place. It also helped the UK police have a more understanding attitude to any real witches found in the woods!

Prof Jean LaFontaine’s book Speak of the Devil: Tales of Satanic Abuse in Contemporary England goes into more depth about this subject. She has also edited the book The Devil’s Children: From Spirit Possession to Witchcraft.

The photo at the top shows some of the books on display at the UK Satanic Abuse Scare, 25 Years On conference, supplied by pagan bookshop Treadwell's.

Previous post and links to books and reports on the SRA panic:
http://www.badwitch.co.uk/2016/07/uk-satanic-abuse-scare-25-years-on_7.html
Speak of the Devil: Tales of Satanic Abuse in Contemporary England
http://www.religioustolerance.org/ra_rep01.htm
http://bfms.org.uk/jean-la-fontaine-on-satanic-ritual-abuse-panic/
https://www.ncjrs.gov/App/publications/abstract.aspx?ID=157278
Posted by Badwitch at 08:04