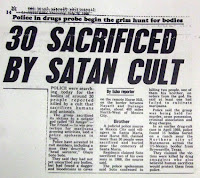 That was a question I was asked twice when I attended the conference on the UK Satanic Abuse Scare: 25 Years On at the London School of Economics on Tuesday. I was wearing both a press badge and a silver pentacle, so I can understand the confusion.

As a pagan who has also worked in the press for the past 30-odd years, it isn’t the first time I’ve come across fellow witches not believing I can be both. Journalists have been among the biggest enemies of modern pagan witches since the mid 20th century – and during the late 1980s to early 1990s we fanned the flames of the Satanic Panic with lurid stories such as those in the clippings at the top of this post.

When I say “we”, I don’t mean me personally. Being a pagan, I would never have written such stories, but most journalists were not so knowledgeable at the time and sensationalist headlines sell. The journalists weren’t making stuff up themselves either, I should add, they were being given inaccurate information by seemingly reliable sources, including children’s charity the NSPCC.

However, one investigative journalist bucked the trend. Dr Rosie Waterhouse, now director of the MA in investigative journalism at City University London, was a reporter at the time. She investigated what was being called Satanic Ritual Abuse (SRA) and found that evidence to back up the claims simply didn’t exist. Her research and debunking of the myth of Satanic Ritual Abuse went on to form the basis of her PhD, awarded in 2014. I was keen to hear Rosie talk at the conference. 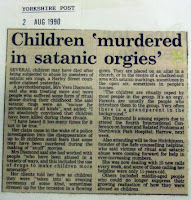 But what was the Satanic Ritual Abuse Scare?

It started with a small group of claim-makers, mostly fundamental Christians, who had read material circulating in America stating that an international network of Satanists were sexually abusing children as part of their rituals – raping young girls, then aborting foetuses and sacrificing them. They portrayed pagans and other occultists as being part of that. These claims were taken seriously by social workers, therapists and police, leading to high profile cases in Rochdale, Nottingham and the Orkneys. Children were taken into care because it was believed their parents were members of this ring of Satanic abusers. Newspapers loved it.

At the conference, Rosie Waterhouse talked about how the media covered SRA - and her 25-year investigation into it.

Rosie had joined the Independent on Sunday and did investigative work. She was tasked with finding evidence for SRA, but back in the days before Google, finding evidence was hard and research was long-winded. Rosie searched for criminal cases and family court cases, with an archive of newspapers as her main resource. There she found criminal cases with anecdotal evidence. Getting in touch with the family courts, she discovered that 41 children had been taken into care. That looked like evidence, but Rosie realised anecdotal evidence is not firm evidence.

She worked back to find out the original source of information. The NSPCC put her in touch with fundamental Christian group the Evangelical Alliance, who put her in touch with Reverend Kevin Logan. He claimed teenage girls were used as brood mares in Satanic rituals, then the foetuses aborted and sacrificed. Asked how many women had told him they had been used as brood mares, Rev Kevin Logan said eight.

Rosie said that seemed to her like a great piece of investigative journalism, but she then got a letter in the post from the Pagan Federation and other letters from Sorcerer’s Apprentice bookshop, pointing out that hard evidence was missing.

Visiting Sorcerer’s Apprentice, she looked at the shop’s archive of letters from pagans and other occultists pointing out where the stories being reported in the press were broken. She said she had never met an occultist before and was nervous, but the upshot was a fantastic archive. The following week the Independent on Sunday's Sunday Review editor Richard Williams asked her to look into it further.

Through the material she received, she concluded there was no forensic evidence at all - no blood, no bones or any other physical proof. These would have been present if the killing of babies and foetuses had been taking place. 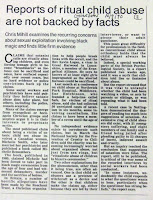 Eventually, this was recognised by the police both in the UK and America and cases against the accused were dropped. The FBI in the US has stated that until hard evidence is found, Americans should not be worried that babies are being sacrificed in Satanic rituals. The scare grew because of impatient cops, poorly trained therapists and social workers, and fantasists who believed things had happened to them that were actually only in their dreams or imagination.

However, SRA accusations are still being made and although the scare of the 1980s and 90s is over, we should not be complacent. A current trend for police to follow a “believe the victim” mantra – rather than “listen to the victim and then investigate the allegations” – could lead to police being taken in by fantasists again.

Rosie summed up by saying that the method journalists should use to tell the difference between true and false allegations is to test the evidence.

And back to that question about whether I can be a witch and a journalist. Well, yes, of course I can, even though I understand why many of my fellow witches are still suspicious of me because of my job outside writing a pagan-friendly blog. Journalists can be the enemies of pagans – but, as Rosie has shown, they can also be our greatest allies, especially if they do their investigations well and test the evidence of what they are being told.

The UK Satanic Abuse Scare: 25 Years On conference was organised by information charity Inform and the renowned pagan bookshop Treadwell’s. Other speakers at the event included Prof. Jean LaFontaine, author of a report that effectively ended the scare; Prudence Jones, former president of the Pagan Federation and active senior member during the scare; Phil Hine, co-founder and co-editor of Pagan News in the early 1990s; and Amanda van Eck of Inform. I will be blogging about their views on SRA over the next week or so.

The photos on this page are of newspaper clippings that were on display at the reception before the conference, showing some of the headlines from the SRA scare. 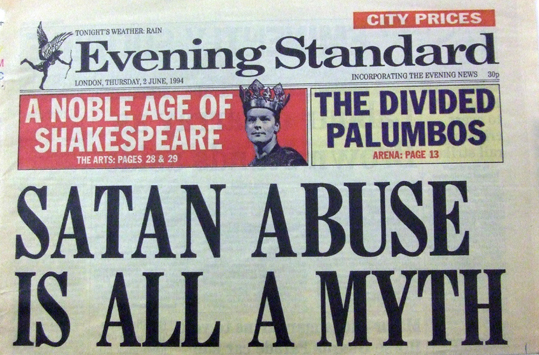 It's a shame these journalist's did not spend a bit more time , looking at some of our politician's , and their behaviour .

Its easy for an expert to discount that there is no such thing as satanic ritual abuse happening. due to the lack of evidence. What about the franklin cover up? this is just one of the events not happening due to lack of evidence but there are many.

Satanic is nothing to do with paganism