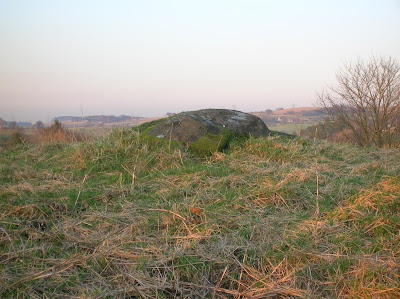 With the Summer Solstice behind us, winter is coming...

...and one of the most famous goddesses of winter is The Cailleach from Gaelic mythology. Her name means "hag" in Scottish, but she appears in tales from Ireland, the Isle of Man and some parts of England as well as from the northern lands. Also, according to a new book called Pagan Portals - The Cailleach by Rachel Patterson, she is far more than just a winter crone.

In fact, Rachel says in her introduction: "She has many myths and legends all passed down verbally and most of them have the same theme, that of renewal, each generation adding or changing bits of the story to suit the times...turning her from a goddess of creation, wisdom, harmony and rebirth into a dark and evil hag. She does seem to have been given the ‘Hollywood’ treatment making her out to be the ‘bad guy’ and trapping her in the confines of winter. But she is so much more…"

Primarily she is a goddess of the landscape, according to Rachel, and is associated with many mountains, caves, rivers and landmarks. Much of the work Rachel has done in researching her book is in collating tales and folklore from around the British Isles that might have a connection with The Cailleach. I thought this was fascinating reading and has given me a real urge to visit some of these ancient sites to photograph and blog about them. Some are even relatively close to me in southern England - so The Cailleach certainly doesn't only have Scottish associations.

Publisher Moon Books says on its website: "The Cailleach - goddess of the ancestors, wisdom that comes with age, the weather, time, shape-shifting and winter. Within the pages of this book Rachel Patterson gives the reader an introduction to the mysteries, myths, legends and magic of the ancient hag goddess The Cailleach, drawing upon ancient legends, stories told and her own experiences."

There are also chapters on practical ways of working magic with the Cailleach, the lessons she teaches and a ritual to honour her. Rachel says that the book offers an introduction to this ancient goddess. I would say it goes a beyond being just an introduction. The small books has a wealth of information packed into it.

The photo at the top shows The Carlin's or Hag's Stone at the Commoncraigs, by Roger Griffith, shared from Wikimedia in the public domain. The stone is associated with The Cailleach.

Rachel's previous books include Arc of the Goddess, Grimoire of a Kitchen Witch and Pagan Portals - Moon Magic.