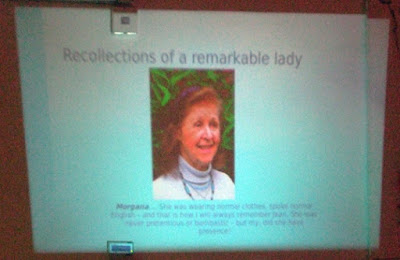 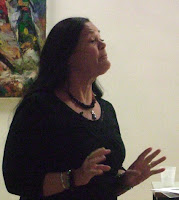 This year’s Pagan Federation London Conference was in honour of Jean Williams, an inspirational woman and high priestess who worked for the pagan community tirelessly throughout her life. She was a lovely person with a great sense of humour. I am glad to have met her on a few occasions, but wish I had known her better. She died last year shortly after launching her book The Play Goes On, and is very much missed.

At the conference, Morgana of PF International (pictured left) gave a talk about Jean Williams' life and legacy, including her work with Pagan Pathfinders and The Rainbow Bridge. The picture at the top shows a slide from Morgana’s talk with a photo of Jean and one of Morgana's memories of her.

Although the title of the conference was Magic and Mind, I made a comment to a friend on the day that it might have more aptly been named Death and Darkness. As well as the eulogy to Jean, there were talks by Lyn Balis on home funerals, Philip Shallcrass on death and Cat Treadwell on inspiration in darkness. 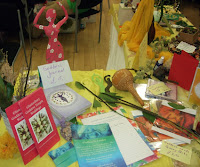 Yet none of these talks were gloomy – they all showed that death at the end of a long life is natural and not to be feared, while the “long dark night of the soul” can be a path to personal insight and growth. Philip Shallcrass’ talk was actually called Death: The Ultimate Tickle. He described his ability to see the spirits of some of those who have died and that in his experience death in some of its forms as a psychopomp, like the characters from Neil Gaiman’s comics and Terry Pratchett’s books, can have a sense of humour.

The programme wasn’t entirely about the darker side of life. I sadly missed the chance to go to workshops on animal spirit guides and the tarot, which were running alongside my own talk on candle magic. After that I went to a fascinating workshop on goddess oracles run by Caroline Wise. Other talks included Rebecca Beattie on 20th century literary pagans, Astrid Haszprunarova on spiritual alchemy, Amie Summer on conservation medicine and Jonathan Woodley on coming of age rites. There was also a chance to try belly dancing with Sascha Cooper and the day ended with music from Spriggan Mist. 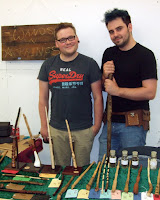 There was a wonderful esoteric market, including stalls run by The Atlantis Bookshop, London Wildlife Trust, Domina Lunea Apothecary, Gemini Aspect pagan suppliers, Fox and Hare wand makers (pictured bottom right), Hendon Heathens, and Goddess in London (pictured above  right). I bought a lovely candle, which I am going to blog more about later, and I won a book called The Avalonians in the tombola.

But for me, the best bit of the day was meeting up with old friends and making a few new ones.

Jean Williams (like most magicians) carried her most secret knowledge to the grave - because like all true magicians they found now one worthy enough to carry forward the old knowledge! Jean was Soecial to most people but especially, to me. Hugo Shepherd