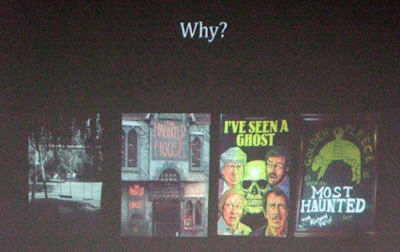 I had a fantastic time at ASSAP's 35th Anniversary Conference, Seriously Strange, in Reading last weekend.  The two-day event was packed with talks by some of the most respected speakers on the paranormal, plus a formal dinner on the Saturday night followed by occult comedy, a suitably strange quiz and dancing until late. Far too much went on for me to blog in depth about every talk, so I'm just going to write a line or two to sum up each one.

The first speaker was Dr Hannah Gilbert talking about ghostly therapy. This was about the possibility of using psychotherapy techniques on ghosts who might be in denial about their death, feel they have unfinished business on earth, or be too attached to something or someone to move on. Anthony Peake then talked about the subject of his latest book Opening the Doors of Perception. This takes a modern scientific look at ways in which the human brain can open up to more of reality than it normally does, without necessarily taking illegal drugs.

After a short break, Richard Freeman of the Centre for Fortean Zoology gave evidence for the continued existence of the Tasmanian wolf - a strange marsupil that has been described as, "The healthiest extinct animal you will ever meet." The next speaker was Ann Winsper on the subject of Teresa Higginson, a Christian mystic who lived in Victorian England and who went into long spiritual trances.

The Highgate Vampire was the subject of two talks over the weekend. David Farrant, who had been involved in investigations of supernatural activity at London's Highgate Cemetery in the 1970s, gave a rational account of the events. There was no blood-sucking undead monster, he said, the media frenzy had been sparked by the filming of a Dracula movie among the famous vaults and tombs.

Following vampires, there were werewolves. Deborah Hyde looked at the Natural History of the European Werewolf - historical accounts of which mostly occurred in mountainous regions where religious change and political upheaval had taken place and where wild heretics were likely to be hiding.

The Rev Peter Laws then asked, ‘Does God Believe in Ghosts?’ The unusual Baptist minister with a liking for all things spooky looked at how various Christian denominations regard dead people and whether their spirits can wander the Earth, or if hauntings are just demons in disguise.

Alan Murdie of the Ghost Club then looked at the life of the late Andrew Green, a paranormal investigator who hunted ghosts for a living for about 60 years. He pioneered scientific methods as well as appearing on TV many times. Alan Murdie has just edited a new edition of his influential book Ghost Hunting: A Practical Guide.

The final talk of the Saturday was called The lost 'science' of Witness Testimony? - Investigating the 'Cage' at St Osyth. John Fraser talked about claims of ghostly activity at The Cage, a house that had once been a medieval prison  in St Osyth, in which Ursula Kemp had been imprisoned before being hung as a witch in 1582.

On Saturday evening the gala dinner was a great chance to socialise and make new friends. CJ Romer gave the after dinner speech, with entertaining anecdotes from ghost hunts he had done. Sarah Spellman offered paranormal comedy, then there was the quiz, in which my team came third. I was pleased I knew the answers to even a couple of the questions. Then there was a chance to dance to some suitably themed music at the paranormal disco.

On Sunday, David Saunders started with a talk called Dreaming: The Evidence for the Survival Hypothesis, which looked at two case studies in which people supposedly got messages in their dreams from those who had died. Jayne Harris was then scheduled to talk about Haunted Dolls after that - and it was the lecture I was most looking forward to. Unfortunately she couldn't be there - but I do recommend her book, What Dwells Within, about objects with spirit attachments.

The talk before lunch was by Dr Terry Palmer of the SPR on encounters with possessing spirits. He specialises in dealing with people who hear voices and who have serious problems that medical science struggles to deal with, including serial killers. He believes that sometimes these people are possessed by evil entities, and he uses psychic techniques to help free them. 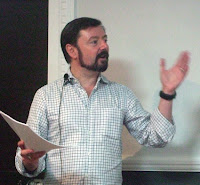 Dr Leo Ruicksbie (pictured left) then looked at the Sociology of Ghost Hunting - who are modern ghost hunters, what do they do and why? It was a really interesting study in which he sent out questionnaires for groups to answer. The typical ghost hunter is apparently a man in his 40s with a 9-year interest in the subject. His name is Mark. Yes. Mark. However, one thing that particularly intrigued me about this talk was Dr Leo's introduction in which he said he had seen something that might have been a ghost during a pagan ritual in honour of Horus at London's Conway Hall - a place I know well as a venue often used for rituals by the Pagan Federation London.

Trystan Swale (pictured at the bottom of this post with CJ Romer) then gave the second talk of the weekend about the Highgate Vampire - The Trickster in Highgate Cemetery. I enjoyed this talk because it was about my favourite archetype, the trickster, epitomised by such deities as Loki and Eris. Trystan's theory is that the archetypal trickster was behind all the fun and games at Highgate back in the 1970s.

Malcolm Robinson's talk deviated a little from the title of Alien Photographs From Around the World and also covered photographs of fairies, ghosts, shape-shifters and the Loch Ness Monster, as well as the strange story of James Dean's cursed car. Apparently the car that killed the famous actor later hurt and injured many other people who came anywhere near it, even though it was a right-off and not drivable.

Following on from these great tales of mystery, Kristian Lander (pictured right) talked about how our mobile phones are modern-day scrying devices and the money in our pockets is as illusory as the alchemist's quest to turn lead into gold. His talk was called Within your Pocket is Magic and Alchemy Perfected. 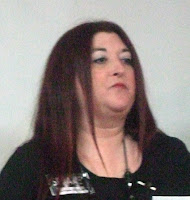 I know those brief descriptions don't do justice to the talks, which were all superb. Neither can a short blog post like this capture the great atmosphere at the event. It was friendly, fun, entertaining and informative. I'm very much looking forward to the next event, which is Seriously Suspicious, at Goldsmiths College in London on November 26. Yes, I know it clashes with Witchfest. It was a tough choice for me which to book for, but I picked the one closer to home and considerably cheaper. Call me a lazy cheapskate maybe, but I don't think I'll be disappointed. You can buy earlybird tickets for Seriously Suspicious for just £10 here: https://www.eventbrite.co.uk/e/seriously-suspicious-tickets-27503218868 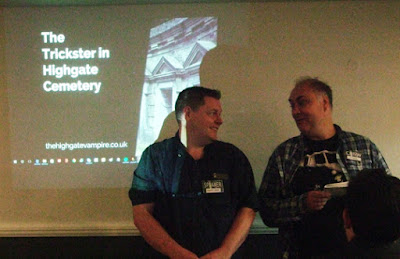 The photo at the top shows a slide from Dr Leo Ruicksbie's talk, the first photo of Highgate Cemetery was taken by myself, Lucya Starza