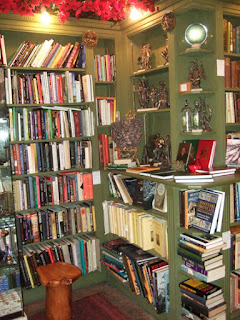 Once again, Time Out is running its Love London Awards, which give people the chance to vote for their favourite shops, cafes, pubs and venues in the capital. The awards are currently at the nomination stage until September 30. After that the most-nominated venues will go head-to-head in a public vote in October.

Two of London's wonderful occult bookshops on the list for 2016 - The Atlantis Bookshop and Treadwell's in the Bloomsbury, Fitzrovia and Holborn area - but they both need plenty of nominations in order to go through to the next stage and be in with a chance of winning the overall prize.

Here are more details about the two shops:

Time Out's website has this description: "London’s oldest independent bookshop on the occult (it opened back in 1922) sells new and secondhand titles on everything from angels and fairies, vampires, werewolves, earth mysteries and magic, to yoga, meditation, feng shui, healing, green issues, spiritualism and psychology. The shop also hosts regular events such as ‘Discovering the Runes (for beginners)."

The Atlantis website is www.theatlantisbookshop.com and the address is The Atlantis Bookshop, 49a Museum Street, Bloomsbury, London WC1A 1LY. 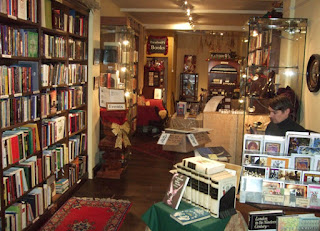 Time Out''s website offers this description: "A boutique bookshop and cultural centre for those with an interest in spirituality, culture, religion, divination and more, as well as literature, history and classics. Treadwell's have both secondhand and new books on offer, and rare and unusual editions too. They also host a regular lecture series and workshops for people interested in various aspects of magical thinking and esotericism. On top of all that, you can also take part in a tarot reading there with one of their four tarot consultants."

Treadwell's website is www.treadwells-london.com/ and the address is 33 Store Street, London WC1E 7BS.

To make a nomination, go to http://www.timeout.com/london/lovelondonawards#/findyourneighbourhood
Then select the neighbourhood Bloomsbury, Fitzrovia and Holborn
Under the shops section, select either Atlantis or Treadwell's. You do have to create a Time Out account or log in to an existing account to make a nomination, but that isn't difficult. The nomination stage ends on 30 September.

The photos show the interiors of The Atlantis Bookshop and Treadwell's and were taken by myself. Credit Lucya Starza and www.badwitch.co.uk if you wish to use them elsewhere.
Posted by Badwitch at 09:32