Occult London: The Temple of Aeolus at Kew Gardens 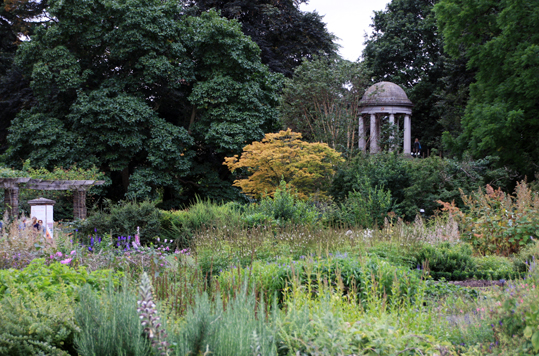 The small domed and columned building in the photo is the Temple to Aeolus, the Greek God who is King of the Winds. It is at Kew Gardens and was built in 1763 by Sir William Chambers, back in the times when it was fashionable to have classical temples in landscaped gardens. The mound it is on was artificially created, because the land at Kew is naturally flat. If you climb up to the temple you get a superb view of the gardens, which is why it was built, but it is also a great place to appreciate the breezes.

In Greek mythology, there are three characters with the name Aeolus, but all are related and all are connected with the winds. In Homer's tale of The Odyssey, Odysseus visited Aeolus' isle and was given a bag that contained winds to help him get back home. The bag was supposed to be used carefully to only allow out the winds he needed, but the hero's shipmates thought the bag contained gold and opened it up fully, letting all the winds escape at once and driving the ship back to Aeolus' shores.

I visited Kew at the weekend and this was just one of the photos I took. I went on a guided tour of medicinal plants and herbs while I was there and I will be posting some pictures and blogging about them over the next week or so.