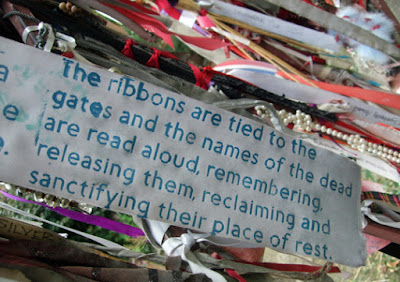 Before Samhain - or Halloween - for the past few years I've been posting photos of London's burial grounds in a series I've called London Necropolis - a Necropolis being a city of the dead.

The photos on this page are from one of London’s most unusual graveyards - Cross Bones, in Red Cross Way, Southwark. It is unusual because it is believed to have originally been was a graveyard for medieval outcasts, especially sex workers known as the Winchester Geese, because they were licensed to ply their trade by the Bishop of Winchester who owned the land.

It continued to be used as a burial ground for the poor until 1853, when it was closed because it was "completely overcharged with dead”. Despite protests by local people, Cross Bones was eventually built over and the dead who were buried there were forgotten.

Then, in the 1990s, archaeological excavations were conducted on the land before the Jubilee Underground line was built. The archaeologists found bodies piled on top of one another, mostly from Victorian times and earlier, of all ages, and many having died of diseases common to the poor.

In 1996 the poet John Constable had a vision about the history of place and was inspired to write a play about it – The Southwark Mysteries. He also instigated the tradition of meeting there on the 23rd of each month to commemorate the outcast dead with a vigil and the tying of ribbons of remembrance on the gates.

Thanks to the dedication of John Constable and other local people, Cross Bones Graveyard was eventually turned into memorial gardens, which are open to visit most weekdays at around lunchtime and on Saturdays. The graveyard gates in Redcross Way are permanently decorated by messages, ribbons, flowers and other tokens of respect.

It has also become a tradition for John Constable and others to hold a Halloween at Cross Bones – a night of entertainment including the enactment of part of the Southwark Mysteries. I went to one back in 2008 and you can read my review here: http://www.badwitch.co.uk/2008/11/death-sex-at-cross-bones-graveyard.html.

Halloween at Cross Bones normally books up very early – this year’s event is already full, and it is possible that it will be the last one ever. However, you can go to the regular Crossbones vigil on Saturday night, 23 October, at 6.45pm in Redcross Way, London SE1 1TA. You can also find out more about Crossbones Graveyard and Memorial Garden, as well as events taking place, here: http://crossbones.org.uk/

The photos on this page were all taken by myself, Lucya Starza, in the past week. If you want to reuse them you must credit my name and www.badwitch.co.uk 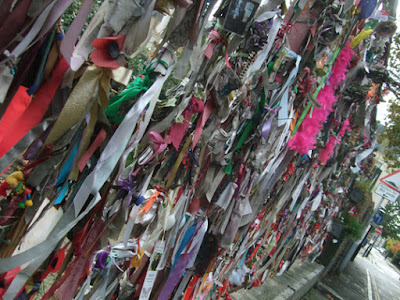