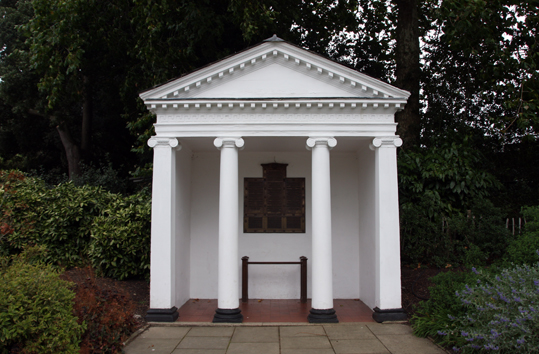 Remembrance Day - or Poppy Day - is a day to remember those who died in the line of duty in war. Originally it was in memory of the fallen soldiers of the First World War, but now is seen as a time to honour the dead in all conflicts.

In most countries, Remembrance Day is observed on 11 November, coinciding with the anniversary of the end of World War I on that date in 1918, but in the UK Remembrance Sunday, on the closest Sunday to November 11, is also marked with ceremonies such as the laying of wreaths at war memorials.

One such memorial is the Temple of Arethusa at Kew Gardens. Although it was originally constructed as a folly for Princess Augusta in 1758 by the architect William Chambers, in the 1920s it was recommissioned as a memorial commemorating the Kew workers who had served and lost their lives in the First World War.

Every year Kew supplies a wreath for London's Remembrance Sunday parade. It is laid on the Cenotaph by the Foreign Secretary. A back-up wreath is also made and, if it is not used in the central London ceremony, is laid in the Temple of Arethusa.

In Greek mythology, Arethusa, which means"the waterer", was a nymph and Nereid who fled from her home in Arcadia beneath the sea to escape the unwanted attentions of a river god. She eventually emerged as a fresh water fountain on the island of Ortygia in Sicily.

She isn't particularly associated with those who have died in war, but more with tragic love stories. However, it is said that her springs of clear, fresh water run deep into the earth so she could perhaps be called upon to deliver messages to the underworld by those whose loved ones died while fighting for their country.