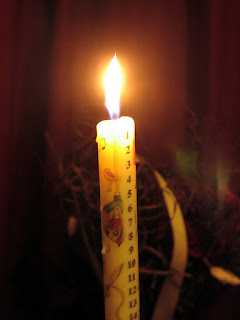 Winter's long dark nights are the time when candles really come to the fore. They give the home a warm glow quite apart from any celebratory or ceremonial uses.

Pyschologists have even shown that real flames – which can be just the flame of a candle – are an excellent way to lift the mood if you suffer from seasonal blues.

Many cultures have festivals at this time of year in which it is traditional to light candles including the Jewish festival Hanukkah, and Diwali, the Hindu festival of lights, as well as Christmas. Pagans celebrate Yule or the Winter Solstice on December 21, the longest night of the year, and candles can be an important part of that.

Here are just a few other seasonal candle traditions for December:

Advent
While Christians might light an advent candle with 24 sections inscribed on it to burn each day from December 1 until Christmas Eve, Pagans can mark a candle with 21 sections to mark the countdown to the Winter Solstice.

St Lucy’s (or Lucia’s) Day
This is on December 13 and is another festival of light honoured in parts of Europe and Scandinavia. St Lucy is represented by a young woman wearing a white dress and red sash with a crown or wreath of candles on her head. There is evidence this festival may date back to pre-Christian times and that St Lucy was originally seen as a goddess.

Yule and the Midwinter Solstice
Wreaths and boughs of evergreens brought into the home for midwinter celebrations are ancient traditions – although the trees themselves and lights on them only became popular in Victorian times in England. Back then the lights were small candles. Obviously, electric fairy lights are much safer.

The Yule log is another popular tradition that might originate from Germanic Paganism and was associated with the burning of a large candle. In 1725, historian Henry Bourne wrote about a possible origin for this in Anglo-Saxon Paganism:


Our Fore-Fathers, when the common Devious of Eve were over, and Night was come on, were wont to light up Candles of an uncommon Size, which were called Christmas-Candles, and to lay a Log of Wood upon the Fire, which they termed a Yule-Clog, or Christmas-Block. These were to illuminate the House, aud [sic] turn the Night into Day; which custom, in some Measure, is still kept up in the Northern Parts. It hath, in all probability, been derived from the Saxons. For Bede tells us, That [sic] this very Night was observed in this Land before, by the Heathen Saxons. They began, says he, their Year on the Eight of the Calends of January, which is now our Christmas-Day: And the very Night before, which is now Holy to us, was by them called Mædrenack, or the Night of the Mothers … The Yule-Clog therefore hath probably been a Part of those Ceremonies which were perform’d that Night’s Ceremonies. It seems to have been used, as an Emblem of the return of the Sun, and the lengthening of the Days...

One modern Pagan witchcraft tradition is to place four candles on a log during Winter Solstice celebrations, light them and watch how they burn down. Each candle represents a season of the year to come and the way it burns and shapes left by dripping wax can be used to predict what might happen in the year ahead.

You can read more about candle traditions throughout the year, as well as candle spells and rituals, in my book Pagan Portals - Candle Magic.