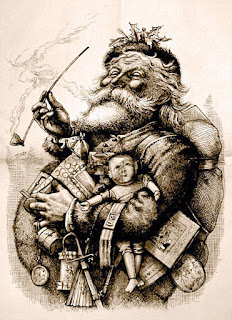 "What religion was practised by the people of Lithuania before their conversion to Christianity in the 14th century?" - blog post about the last European country to be officially pagan at BBC History Magazine: http://www.historyextra.com/qa/religion-lithuania-pagan-conversion-christianity

"Clive Standen and Maude Hirst travel to Scandinavia as Real Vikings looks at Paganism" - story at Monsters and Critics.com: http://www.monstersandcritics.com/smallscreen/clive-standen-and-maude-hirst-travel-to-scandinavia-as-real-vikings-looks-at-pagan-beliefs/

"Did a witch's curse kill a retired army captain and magistrate?" - story at Stoke Sentinel: http://www.stokesentinel.co.uk/north-staffs-legends-did-a-witch-s-curse-kill-an-army-captain/story-29951044-detail/story.html

The picture shows a 1881 illustration by Thomas Nast who, along with Clement Clarke Moore's poem "A Visit from St. Nicholas", helped to create the modern image of Santa Claus
Posted by Badwitch at 08:08