Craft: How to Make a Brigid's Cross for Imbolc 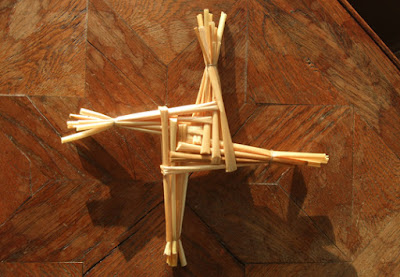 Brigid's crosses, like the one in the photo above, are traditionally made in Ireland on 1 February, which is St Brigid's feast day. They are also often by pagans for the festival of Imbolc on the same day, celebrating the first stirrings of spring. While Catholics honour St Brigid, Pagans honour Brigid who is the Celtic Goddess of poetry, the fires of the smith's forge and healing wells as well as having a variety of other roles too.

A Brigid's cross is usually woven from straw or rushes. As well as looking like a cross it represents the sun, which is noticeably increasing in strength as the days lengthen.

The crosses are traditionally hung over doors or windows as a protective symbol and are particularly associated with keeping homes safe from fire. Personally I would get a smoke alarm too, but a little magical help can't hurt. You can, of course, also put them on Imbolc altars to honour the goddess, then light a candle to represent her sacred flame.

I decided to have a go at making one. There are lots of easy to follow instructions to be found in books and online, but I've set out the basic steps using strips of paper in the other photos on this post.

You need about 14 straws or rushes. I bought natural crafting straws from a hobby shop, but you could pop into your garden and pick suitable dried plant stalks if you prefer to follow olden ways.

Soak the straws to make them supple.

Start the cross by placing one straw straight upwards, then fold a second straw in half and place it around the middle of the straight straw, as in the photo top right.

Turn the two straws 90 degrees to the left, fold a third straw in half and place that around the folded second straw so that it is parallel to the right half of the first straw. 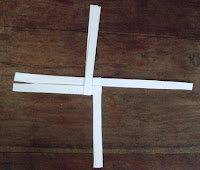 Turn the cross 90 degrees again, fold a fourth straw in half and place it around the third straw, holding that in place.

Keep on turning the cross, folding a new straw and placing it around the previous one until you have a suitable sized woven square in the middle of the cross. Then tie the ends of the arms with string or cotton.

It is a bit fiddly, but not really that difficult once you get the hang of the basic process. The picture at the top shows my first attempt and I'm reasonably pleased with it.

If you want to find out more about the goddess Brigid, I recommend the book Brigid: Meeting The Celtic Goddess of Poetry, Forge, and Healing Well. It is by Morgan Daimler and is in Moon Books' Pagan Portals series. You can read my review of it here: http://www.badwitch.co.uk/2016/03/review-pagan-portals-brigid-celtic.html