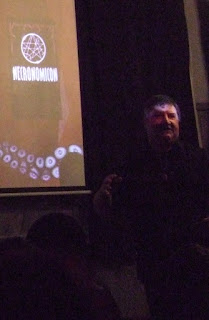 Goldsmiths University is running an evening course starting on 17 January, 2017, called Myth, Ritual and Magic: Introducing the Anthropology of Religion. The tutor is Dr Justin Woodman, who I previously heard talk at Seriously Possessed and Cthulhu and Contemporary Occultures.


This course introduces an anthropological perspective on religion, examining its social role in diverse cross-cultural contexts as well as investigating the societal, evolutionary and psychological significance of religious behaviours with regard to understanding what, if anything, constitutes ‘human nature’.

To this end, the course will examine the key categories of magico-religious belief and practice used by anthropologists (including myth, ritual, witchcraft and shamanism), as well as surveying theories regarding the continued importance of religion in a contemporary, globalised world with regard to topics such as fundamentalism and identity, religion and violence, and new religious movements.

This is an introductory ten-week short course with weekly sessions from 6.30pm-8.30pm at Goldsmiths, University of London, New Cross, London SE14 6NW.

You can book here: https://www.eventbrite.co.uk/e/myth-ritual-and-magic-introducing-the-anthropology-of-religion-goldsmiths-university-tickets-25510304006

The photo shows Dr Justin Woodman giving a talk about Cthulhu in popular culture.
Posted by Badwitch at 08:00