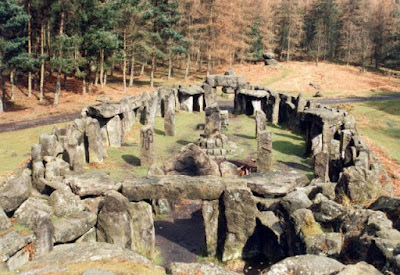 Here is a round-up of news stories from around the world the past week relating to witchcraft, paganism and the occult. Several stories are about events in the US:

"From severed heads to the 'Hex on Becks' – charting football's pagan past" - story at Scroll.in: https://thefield.scroll.in/827855/from-severed-heads-to-the-hex-on-becks-charting-footballs-pagan-past

""Plenty to explore on this perfect half-day stroll" - story at the Harrogate Advertiser about the Druids Temple, a folly created by William Danby of nearby Swinton Hall (pictured top): http://www.harrogateadvertiser.co.uk/lifestyle/outdoors/plenty-to-explore-on-this-perfect-half-day-stroll-1-8343533

"W.I.T.C.H. Rises Again to Take on the Patriarchy, White Supremacy, and More" - story at The Daily Dot: http://www.dailydot.com/irl/witch-is-back/

"Doctors are scarce on India's river island – so the witch-hunters are back" - story at The Guardian: https://www.theguardian.com/world/2017/jan/29/witch-hunters-return-river-island-assam-india

"The Brattle Theatre presents a weeklong celebration of the occult" - story about a week of films and talks about the occult in movies, in the US, at Metro.us: http://www.metro.us/boston/the-brattle-theatre-presents-a-weeklong-celebration-of-the-occult/zsJqaA---Bh9Q7DCY5Qpc/

"Salem finalizes plans for memorial where 19 'witches' were executed" - story at The Boston Globe: https://www.bostonglobe.com/metro/2017/01/27/salem-finalizes-plans-for-memorial-where-witches-were-executed/mB4UOukHKKsFtENzhTA9BP/story.html

Photo copyright details: This image was taken from the Geograph project collection. See this photograph's page on the Geograph website for the photographer's contact details. The copyright on this image is owned by Paul Allison and is licensed for reuse under the Creative Commons Attribution-ShareAlike 2.0 license.
Posted by Badwitch at 13:50