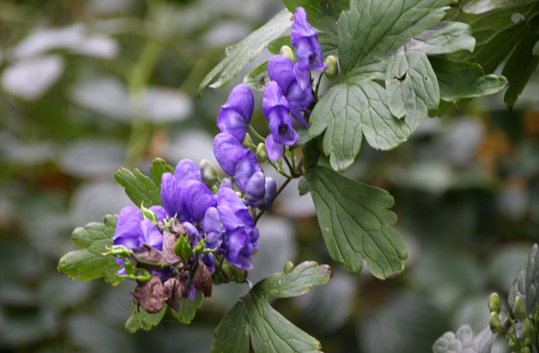 The beautiful but deadly flower in the photo above is wolfsbane, also known as also known as aconite, monkshood, devil's helmet and Queen of all Poisons. I took the photograph on a plant tour of Kew Gardens last summer, but I am sharing the picture now because it features in the title of a fascinating new book about witchcraft - By Wolfsbane and Mandrake Root: The Shadow World of Plants and their Poisons, by Melusine Draco, which is launched tomorrow.

Melusine, who is also the author of the Traditional Witchcraft series of books, shows how witchcraft and knowledge about poisons have a long and intertwined history. The crime of poisoning, or ‘veneficium’, was associated with sorcery and witchcraft back into ancient times, but witches also made use of poisons in controlled amounts for such things as flying potions for shamanic journeying or astral travel. And, of course, many poisons also have medicinal uses to heal as well as to harm. 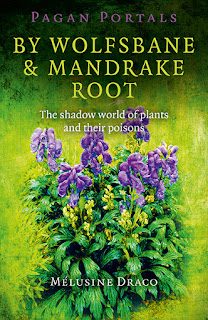 By Wolfsbane and Mandrake Root offers a history of the use of poisons and their remedies and is also something of an encyclopedia of poisonous plants, listing the scientific and botanical details of pretty much any dangerous plant you are likely to encounter or read about. Being a book about witchcraft, it also mentions their magical uses. For example, wolfsbane, "One of the most beautiful and also oldest and most deadliest of poisons," has, "Magical propensities for invisibility and protection from evil. Excellent for redirecting predators."

The book is not encouraging anyone to use or take poisons. Melusine points out that the information in the book is for interest only. However, learning to recognise poisonous plants can also protect us from accidentally picking or eating them. Some are so dangerous they should not even be touched. Forewarned is forearmed.

Publisher Moon Books describes the book on its website as: "A study of poisonous plants, many of which have beneficial uses in both domestic medicine and magic."

It goes on to say: "A large number of poisonous plants have beneficial uses in both domestic medicine and magic. Needless to say, when utilising a toxic plant in magic, we are adding certain extra deadly or potent energies into the mix and it is inadvisable to start messing about with deadly poisons unless we’ve made a thorough study of the subject - and not just by glancing at a paragraph in a book on herbal preparations!"

By Wolfsbane and Mandrake Root: The Shadow World of Plants and their Poisons can be ordered via Amazon.

The photo at the top shows Aconitum hemsleyanum (climbing Monkshood) at Kew Gardens and was taken by myself, Lucya Starza. Credit my name and www.badwitch.co.uk if you reuse the image