A Thank-You to the Staff at Wildwood, Glastonbury 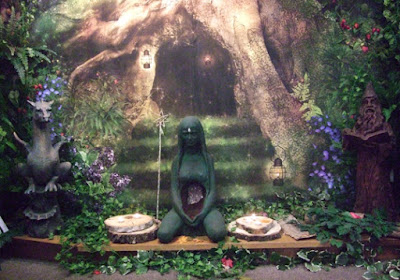 I stopped off in Glastonbury yesterday on my way home from my holiday in Cornwall. I wanted to do some shopping and visit the sacred springs.

One thing that I saw while I was there was deeply upsetting - and I wanted to thank the staff at the shop Wildwood for their help.

First, the thing that upset me was that I witnessed three men being cruel to a dog. The dog - a small Jack Russell - was tied up outside a shop, presumably while its own was inside. The three men were threatening to hit the dog because it yapped at them. One of them said they "would break its paws". The men were probably drunk. I tried to intervene and asked them to leave the poor dog alone, but that only seemed to make things worse and I had to get out the way in a hurry as I thought they were also about to hit me.

I rushed into Wildwood in a bit of a state, mainly because it was the next shop along and I thought that getting inside a shop would get me away from the three men.

The staff at Wildwood were lovely, and suggested I rest in the sanctuary at the back of the shop - which I photographed and you can see it in the picture at the top.

Thank you very much.

I do hope the dog was OK, and I really wish I could have done more to help. Hopefully the men moved on without doing what they were threatening.

I live about 4 miles from Glastonbury , sadly it is not always the peaceful place people think it is , there can at times be a lot of nasty people there , as you say it is often drink or other substances that cause this. I hope it did not spoil the end of your trip.

Thanks. It didn't spoil the end of my holiday - I'm going to be blogging about the lovely things I did at Glastonbury as well.